What teachers want: where should a bigger budget go? 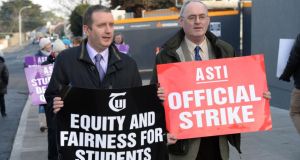 It’s been a stormy few years for education. Since the recession arrived in 2008, teachers have protested, loudly, about cutbacks and changes to the education system. Like it or not, the teaching profession has arguably the most vocal of all trade unions, and they have some degree of clout in deciding where the money goes and what the policies are.

Secondary-school teachers have received most of the media coverage, with a seemingly endless parade of strikes, threatened strikes and various forms of industrial action – and the proposed junior cycle reforms top the teacher grievance list. By contrast, primary teachers appear, at least on the surface, to be happier with their lot, but this belies simmering grievances.

1 Lithuanian man given until midnight on Saturday to leave Ireland
2 Steve Coogan: ‘Come Out, Ye Black and Tans is two fingers to the British’
3 Anti-Irish bigotry in Britain has not gone away
4 Ryanair’s Michael O’Leary under fire for comments on Muslim men
5 Coronavirus in Europe: Two dead in Italy as fears grow that attempts to contain illness are failing
6 Archbishop: Sex abuse of women by L’Arche founder ‘reprehensible’
7 30 great family holiday destinations in Ireland and abroad
8 Fintan O’Toole: Irish voters' actions are not populist – just sensible
9 The view from Clondalkin: If Sinn Féin don’t get in, ‘there will be marches’
10 Ben Affleck: ‘It took me a long time to admit I am an alcoholic’
11 Ivan Yates turns the blowtorch on all politicians
12 Parties to continue talks with Sinn Féin despite Drew Harris’s IRA comments
13 Drug dealer loses codes for €53.6m bitcoin accounts
14 Elisabeth Moss: ‘I don’t care what it is as long as it’s good’
15 Pat Leahy: Fianna Fáil and Fine Gael will not crawl off and leave McDonald the stage
16 Paul Flynn: How to cook the perfect chowder – don’t use flour and keep it simple
17 Weekend of floods, sleet and high winds in store as weather warning issued
18 Would you kill one person to save five? Depends if you’re a millennial or not
19 Who turned up to the Dublin casting call seeking ‘bone thin, amputees, crooked teeth’?
20 Uncovering Ireland’s lost field names before it’s too late
21 Blue Brexit passports made by European firm to be issued from next month
22 ‘I joked about swapping bodies’: The story of a trans couple in Sligo
23 EastEnders reaches peak absurdity with a 35th anniversary shipwreck
24 David McWilliams: Germany needs a new business model
25 A Dad with brain cancer: I was given 18 months to live, it put things into perspective
26 Social Democrats will not join government involving both ‘civil war’ parties, leaders say
27 War of Independence files on IRA policing of spies goes on display
28 L’Arche founder implicated in sexual abuse of women
29 Jennifer O’Connell: Why are women in midlife so unhappy?
30 Ross O’Carroll-Kelly: ‘I just shake my head ... The dirty dog. The filthy hypocrite’
31 England v Ireland preview: Ireland’s revival to face its sternest test
32 Keeping Donegal on the road to success a costly business
33 Knock gets visit from world’s largest passenger plane
34 Steve Coogan says ‘my Irish passport will be arriving shortly’
35 More than 25 people to sue over circulation of images taken at Dublin Garda station
36 ‘IRA has gone away’: McDonald responds to Garda Commissioner’s comments
37 A maverick taking on the Irish whiskey establishment
38 Chance encounter with gardaí unmasked bitcoin millionaire drug dealer
39 Google completes purchase of Treasury Building for €120m
40 MV Alta: The unmanned voyage of the Ballycotton ‘ghost ship’
Real news has value SUBSCRIBE