Global warming is often associated with distant lands, so Trócaire is working with teachers to show young people how they can help the planet 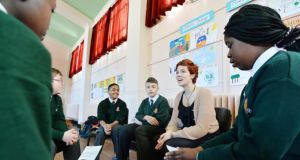 ‘Do you think you do a good job at looking after the planet?”

The group of third-year students from Loreto Secondary School in Navan shuffle their feet and peer nervously from side to side, looking for confirmation from their peers. No hands are raised.

Stephen Farley from Trócaire points towards a collection of images scattered on the floor at the top of the classroom. They include photos of the Paris skyline, traffic congestion on a motorway, iPhones, flooding in Co Limerick and a herd of cows munching on grass.

“I’m going to ask you to choose one of these images and ask yourself: is this photo linked to climate change?”

The teenage girls scurry forward, grab a laminated photo, and move en masse to the side of the room marked “linked”.

“You’re the first group ever to all get the answers right,” says Farley. “All the images are linked to climate change.”

Farley is part of Trócaire’s development education team, which has embarked on an ambitious three-year journey educating children north and south of the Border about climate change and climate justice.

Jen Murphy, development education coordinator for Trócaire, says the aim of the project is to motivate Irish people to speak up about climate change and to consume in more sustainable ways.

“We want to enable children and young people to explore global justice issues and to make connections between their own lives and children elsewhere in the world,” she says. The project hopes to mobilise young people so they are equipped to take “meaningful action for change”.

Trócaire’s development education works with students aged three to 18 and their teachers, providing resources on social justice issues for schools in English and Irish.

“Children have a really strong ability to empathise and to recognise basic needs,” says Murphy. “They’re well capable of engaging in concepts like near and far, similarity and difference.”

She says Trócaire’s latest education project asks teachers and principals to respond to the pressing issue of climate change and climate justice through conversations and activities in the classroom.

Farley has arrived in Navan to spend the day talking to pupils about how climate change affects their daily lives and the steps they can take to support those suffering from the effects of extreme weather.

He worked as a teacher for 10 years in the UK before moving back to Ireland to join Trócaire. He tries to encourage an “active response” from students instead of a passive one.

The key to development education is creating a connection between a student’s local experience of extreme weather events and global climate change, he says. “The food for thought in these workshops is great to start with. Then it’s following up with the options after that,” says Farley. “If you can set them on that path, they’ll keep going. It’s making sure that, once they leave the workshop, that path is clear to them.”

Twenty minutes in to his session with the Loreto students, Farley begins to talk about climate change. The easiest way to explain it is to introduce you to CJ, he tells the students. He gestures to the screen behind him, which shows a large bumblebee looking sceptically at the black clouds gathering overhead.

The Trócaire animation uses the character of CJ the bee (the letters stand for climate justice) to explain the carbon cycle, fossil fuels and climate change in clear and simple terms. The colourful and entertaining short video, created by Giant Animation, presents CJ as a mascot to champion the cause of climate change.

“We wanted to pick a character that related to Irish school kids just as much as African school kids and get a universal understanding of what’s going on,” says Daniel Spencer from Giant Animation, who created a character he hopes will inspire both child and teenage audiences.

Only a few minutes’ walk from the Loreto school, Lydia McCarthy is running a development education session with a group of sixth-class students from Mercy Convent National School.

McCarthy, who left primary-school teaching after she discovered her passion for bringing global issues into the classroom, has also opened her session with an introduction to CJ the bee, only this time he is in jigsaw format.

After the students rush to piece together the giant jigsaw on the floor, McCarthy asks them to think about what CJ represents and whether they have witnessed climate change in Ireland. The room is quiet at first, but, as soon as McCarthy mentions last year’s storms, the hands shoot up.

As with Farley’s sessions for teenagers, McCarthy hopes that, by bringing the issue closer to home, the students will be able to grasp climate change as a global issue.

“There’s not one child who hasn’t been affected in the last few years by the extreme weather,” she says. “It’s too abstract and too big an issue if I’m just talking about atmospheric pressure and farmers in Ethiopia that aren’t able to grow their crops. They’re interested in that, but they can’t empathise with that.

“I’ll show them pictures of Ireland and ask, ‘Have you experienced extreme weather’, and they’ll say, ‘Yeah, there was snow last year that closed our school for two days’.”

‘I don’t want them having nightmares’

McCarthy talks about climate change as a serious issue but in a manner she hopes will not frighten younger students.

“I want them to realise that it’s very serious, it’s something we need to act on, but I don’t want them going home and having nightmares,” she says. “The most important part of it is empowering them to be able to take action.”

But what can primary-school students under 12 do to help fight the effects of climate change?

McCarthy finishes her talk by handing out flashcards with ideas about how the students can take action. The cards include suggestions such as planting a tree to take carbon dioxide out of atmosphere; cycling or walking to school instead of taking the car; growing vegetables to reduce airplane transport fuel; and talking about climate change with friends and family.

She highlights the important role teachers play in the continuation of the development education sessions.

“I see my role as twofold: to introduce the idea to the students but just as importantly, if not more importantly, it’s providing the resources for the teachers to continue exploring it further in the class.

“I’m able to come in and set the context and talk about the issue, but it’s the incredible work that the teachers do when I leave. They’re able to take what I introduce to the students and explore it even further.”

Jen Murphy says the social justice theme of the education sessions, both at primary and post-primary level, carries real weight for young people.

She says both the teachers, and their resources, including the CJ animation, provide “a sound introduction to climate change, the science behind it and the new concept of climate justice and how it impacts on people.”

Students leave the sessions with a much greater awareness of the role they can play in fighting the effects of climate change, she says.

“They’re so active and passionate about this issue, and they see it as the greatest injustice of their time. They know they have a responsibility and that political leaders are accountable to them.”

For more information on climate change and climate justice, teachers, parents and students can visit the following websites: