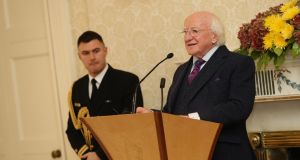 President Michael D Higgins and his wife Sabina hosted a reception in Aras an Uachtarain for Philosophy Ireland on Saturday. Photograph: Julien Behal/Maxwells

Teaching philosophy in schools, and promoting it in society, is urgently needed to enable citizens “to discriminate between truthful language and illusory rhetoric”, President Michael D Higgins has said.

Speaking at a function at Áras an Uachtaráin to mark World Philosophy Day, which fell this week, the President expressed concern about an “an anti-intellectualism that has fed a populism among the insecure and the excluded”.

Amid claims that we have entered a “post-truth” society, he asked how we might together and individually contribute to a “reflective atmosphere in the classrooms, in our media, in our public space”.

“The dissemination, at all levels of society, of the tools, language and methods of philosophical enquiry can, I believe, provide a meaningful component in any concerted attempt at offering a long-term and holistic response to our current predicament.”

The event Saturday incorporated a reception for Philosophy Ireland, a new organisation seeking to promote philosophy in schools and society.

Sabina Higgins, who joined her husband the President on a state visit to Vietnam and Laos last week, is a patron of the organisation.

“The teaching of philosophy is one of the most powerful tools we have at our disposal to empower children into acting as free and responsible subjects in an ever more complex, interconnected and uncertain world,” Mr Higgins said.

“A new politics of fear, resentment and prejudice against those who are not ‘like us’ requires the capacity to critique, which an early exposure to the themes and methods of philosophy can bring.”

Mr Higgins welcomed the introduction of philosophy as an optional short course on the reformed Junior Cycle but suggested the subject should be further embedded in the Irish education system.

“This, of course, would be greatly facilitated by the inclusion of philosophy as a subject in the Leaving Certificate. Even an excellent version of ‘Politics and Society’ is not an adequate substitute for the teaching of philosophy as a standalone subject.”

Philosophy for children, or P4C, offers “an engaging path to a humanistic and vibrant democratic culture”, and a means of encouraging people to dialogue respectfully, he said.

“The emergence of those digital echo-chambers in which people are not allowing themselves, their beliefs, or indeed their prejudice to be challenged, has become a matter for considerable discussion as a response to recent events in the USA and Europe. There are nowadays so many ways of accessing information on the Internet without ever coming across the informed contribution of journalism.

“It is so important, then, that our children - all of our citizens - be encouraged to think critically rather than merely reproduce the information pushed towards them by proliferating media sources.

“It is so important, too, that they learn to articulate their thoughts and provide justifications for them, and that they find ways of disagreeing without resorting to violence, whether verbal or physical.”

He added: “I believe that those virtues of reflection, of critical reasoning and of ethical enquiry are ones that have gained renewed urgency in the present moment, as humanity is faced with unprecedented challenges of a global kind - from climate change to mass migration.

“If we are to achieve the delivery of, for example, what we have agreed internationally as to climate change and sustainable development, we need no less than a change in consciousness as to our interdependence and new shared vulnerabilities.”