Some ‘free schools’ charging enrolment fees despite ban on practice 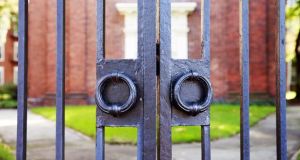 On foot of complaints, the Department of Education contacted a number of schools in the non fee-paying sector, advising them that admissions charges are illegal. Photograph: iStock

Some schools have been charging parents up to hundreds of euro in enrolment fees despite legislation prohibiting the practice.

Between October 2019 and July 2020, the Department of Education’s school governance section received more than 30 complaints from parents about schools charging admission fees in breach of the 2018 Admissions Act.

This legislation, which commenced on October 3rd, 2018, prohibits so-called “free schools” – namely those in which students do not pay for tuition – from charging for enrolment or continued admission.

Clonkeen College, Oatlands College and Sancta Maria Secondary School - all non-fee-paying secondary schools in south Dublin - as well as Adamstown Castle Educate Together National School in Lucan, Co Dublin, are among those who have asked parents or guardians for non-refundable payments before children attend class. Clonkeen requested €400, Sancta Maria and Oatlands asked for €50 and Adamstown looked for €110.

On foot of complaints, the department contacted a number of schools, advising them that such charges are illegal. In several instances, schools subsequently reversed their policy. However, as the names of the schools were redacted by the department in response to a Freedom of Information request, it is unclear exactly how many schools have been in contravention of the law.

“Where the department is notified of any alleged breaches of this section of the act, [we] will follow up directly with the school involved, to ensure that the school is in compliance with the act, and, where deposits have been paid, that they are refunded without delay,” the department said.

On March 19th last, the department wrote to the chair of the board of management at Clonkeen College saying “concerned parents” had contacted it to complain that they were charged a fee as part of the admissions process.

It noted this was prohibited by law, adding: “The department has also received a copy of a letter from the school to parents/ guardians offering a placement and requesting a payment of €400 to accompany the acceptance form, refundable upon the child being enrolled in the school.”

On March 30th Clonkeen’s board of management replied, telling the department it was “now compliant” with the terms of the relevant circular.

Clonkeen has since written to parents stating that its charges were not in compliance with the Education Act and offering a full refund.

Neither Clonkeen nor Sancta Maria responded to requests for comment.

Brian Smith, chair of the board of management of Adamstown, said that their parents were being asked for a voluntary contribution, not an admission fee, and that no child had or would be denied a school place if parents did not pay. However, he said the admissions letter had not been revised in several years, was “badly worded” and could have misled or confused parents. The school is now writing to parents who were offered a place and did not accept, as well as the entire school community, to explain and apologise.

Oatlands said it had since updated its admissions policy, which it said was based on a template from the department’s website, but it did not address specific questions about the fee. In its updated policy, a “non-refundable… administration fee of €50 is requested with each [Oatlands] application form.”

The department said all schools were currently in the process of revising their school admission policies for the 2021/22 school year.