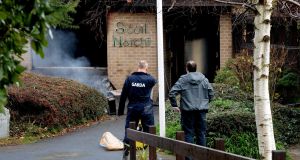 Gardaí at the scene of the fire at Scoil Naithi in Ballinteer. Photograph: Cyril Byrne/The Irish Times

The Scoil Naithí primary school in Ballinteer will remain closed for a second week from next Monday after suffering “extensive damage” in a fire.

The front entrance to the south Dublin Gaelscoil, the principal’s office, the hall, the staff toilets and some corridors were extensively damaged in the blaze while all eight classrooms suffered smoke damage, according to the school’s board of management.

Four units of Dublin Fire Brigade were called to the school on Stonemason’s Way in Ballinteer after a fire was reported at 4am on Monday.

The cause of the fire is still unknown although there have been reports of a break-in. A Garda spokeswoman said gardaí were continuing their investigation into the cause of the blaze.

In a statement posted on the school’s website on Thursday, the board confirmed all eight classrooms would be available for use by Monday, February 6th, despite the damage based on assessments by structural engineers, builders and professional cleaning companies.

The centre of the building, and the amharclann (hall) will be sealed off and could take 3-4 months to rebuild and repair, it said.

“We appreciate this has been a very difficult week for parents and families who have to take unplanned holiday time and we have been working hard to expedite the reopening,” said the message written in Irish and English on the school’s website. “However, we have had to wait for structural assessment of the safety of the building, the extent of damage and thus the full extent of the work that need to take place.”

Despite offers of support from the local community, parents, families and neighbouring schools there was no single alternative or combined alternative locations available to accommodate all the classes, said the board. As a result, the school will remain closed next week and reopen on February 6th.

The school was founded in 1973 and was officially opened in 1980 by former taoiseach Charlie Haughey.