Should you take your child out of school early to avail of cheaper summer holidays?

Many parents say they can only afford a break during term-time. But experts say children risk losing out on education 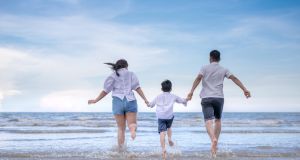 Tusla, the State’s child and family agency, strongly advises parents not to take children out of school for holidays during the school year. Photograph: iStock

It’s almost summer and the cost of taking a holiday is set to soar. For many parents, there’s a dilemma: do you skip school early to take advantage of a cheaper break , or risk your child falling behind in coursework?

For Anna Gleeson, a Dublin mother who takes her children out of school every June before the school year ends, the decision is an easy one.

“I have no problem with taking the kids out of school to go on holiday,” she says.

“I have done it every year since my eldest was in junior infants and I don’t give it a second thought. He is now in sixth class while the others are in fourth and second class and they are all doing well and getting great grades – so I don’t believe they are losing out.

“We usually go on holiday at the beginning or middle of June when they are not doing very much anyway – they might miss sports day or the occasional school tour but that’s a small price to pay when they are hanging out by the pool in the sunshine.

Gleeson says she takes them to places where the experiences themselves are educational: museums, different cultures or foreign languages.

“I don’t regret a minute of it as there are plenty of times when the teachers take days off for staff meetings or training days without giving any thought to how our lives might be disrupted or what the kids might be missing,” she says.

She insists that teacher-training days should take place during teachers’ “ridiculously long holidays”.

“So, I wouldn’t take kindly to a teacher telling me off for taking a holiday during term time. It’s the only time we can afford to go away and I believe that if a child is doing well, then a week or two from school won’t make a difference.”

So what does the law say? In England, parents can face fines for taking their children out of school for a holiday during term.

There are no such fines in Ireland. However, schools are obliged to inform social services if a child has missed 20 days or more in the school year, or if it is concerned that a child is missing too much school.

The official position of Tusla, the Child and Family Agency, is that it “strongly advises” parents not to take children out of school for holidays during the school year.

It adds: “Taking a holiday during term time means that children miss important school time. It will be difficult for them to catch up on work later on. As a result, they may fall behind with school work and lose confidence in their abilities.”

Most principals and teachers say schools are unlikely to object too forcefully to families missing a short period of time.

Notwithstanding this, Pairic Clerkin, chief executive of the the Irish Primary Principal’s Network (IPPN), says it is not advisable for children to miss school unnecessarily.

“IPPN would be concerned about children being removed from school during term time other than in exceptional circumstances,” he says.

“There is a schedule of work set out for the year and students missing at any point during the school year will miss out on the work covered during that timeframe.”

Caitríona Breathnach, however, is unapologetic about taking her children away each year for some winter sun.

And while she says there has never been an issue, this year it coincided with one of her daughter’s Leaving Cert mock exams.

She says the problem was easily rectified as the school was “very accommodating”.

“For the last few years, my sisters and I have taken winter breaks with our families to Fuerteventura,” says Breathnach, a Dublin-based entrepreneur who runs a natural skincare company.

“Some schools get a mid-term in February for a week; others get a day or two – but our holiday will get booked regardless.”

This year, she says all three of her children – aged 18, 16 and 13 – got their mid-term break from February 16th to 25th. Because flights were cheaper on the 15th, she says leaving a day early was a “no-brainer”.

“ I didn’t think twice about taking my son out of transition year, nor my daughter out of first year. However, the spanner in the works came from my eldest, as her mock Leaving Cert French oral fell on the same day,” she says.

The school was “very accommodating” when she explained she was going away and arranged for her oral to be the first of the day – 8.30am – and she was home in time to get to the airport.

On the return leg of the holiday, she says she again faced the flight choice of either Saturday 23rd or, for half the price, Monday 25th.

“So, again, for the sake of missing a first day back to school, the extra vitamin D from the sun, the savings and the longer holiday won out

“I gave little thought to my children skipping school, nor have I in the past, nor would I in the future. The life experiences and memories from the holiday far outweigh the missed classes of two school days.”

Child psychologist Peadar Maxwell acknowledges that taking children out of school for a family holiday can be a great way to make memories. However, it could also set a bad example for your child.

“Lots of parents have taken their children out of school for a trip and convinced themselves that the trip was as educational as a week in school and they could be right,” he says.

“But if your reason for missing school is simply that you want a holiday and are saving a few euro, then you risk giving your child the wrong message; that school and their education is not important.

“If on the other hand you have thought about what and why you are doing something and you have weighed up the possibility of not having any family holiday at all or losing out on an important family event that is being held elsewhere, you might have erred on the right side of the ‘travel is education’ equation.”

The Wexford-based psychologist says parents who consistently choose to travel during school time are probably “prioritising your travel lust over your child’s education”.

He says parents should consider factors such as where their child is in their education , the child’s ability to catch up and the impact of disruption to their routines and learning.

“It doesn’t mean that parents should never consider the option but don’t kid yourself into thinking it is no big deal – because it is,” he says.

“ So if you are going, prepare your child for missing school, explain the exceptionality of the situation and speak to your child’s teacher about how you can lessen the impact of missing a week of teaching. Be aware of and respect the law and your child’s school’s policy on attendance.”

England: Parents risk paying at stg£60 fine if they take children between five and 16 out of school during term time.

Wales: Schools can authorise 10 days off in certain circumstances, but there are potential fines for unauthorised absences.

Scotland: No fines – but local education authorities can issue orders required parents to explain a pupil’s absence. In the absence of a reply or reasonable excuse, they risk going to court

Northern Ireland: Parents may be referred to social services if a child’s attendance drops below 85 per cent. If they don’t engage, they risk a fine.

Ireland: No fines – but schools are obliged to report a child to social services when they miss more than 20 days of school.