Mina’s coeliac diagnosis: ‘She was still hungry after three bowls of cereal’ 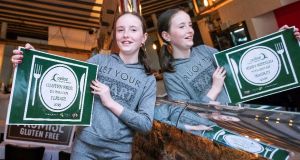 Gluten-free living: Mina Campbell was seven when she was diagnosed with coeliac disease

Our daughter never enjoyed sandwiches. We all used to roll our eyes when Mina would, from the age of about three, eat the cheese but throw away the bread. We thought she just didn’t like it. I now think it was her body telling us.

Once Mina was about six I started to wonder if more was going on. She ate bucketloads of pasta and never had issues with cake, so I didn’t suspect coeliac disease. But I had noticed that pancakes caused her a problem, and I wondered if it was the fats.

I mentioned it to my GP one time, and he assured me that Mina was thriving and that she probably wouldn’t be if she had something like coeliac disease. She was about the same size as her classmates, and she had loads of energy and normal bowel habits.

It was her teacher who prompted me to investigate. She took me aside one day and said it would be wrong not to tell me how pronounced Mina’s protruding tummy had been the day before

Everything was very normal, in fact, except her tummy: her stomach would quite regularly swell out a bit. I put it down to the podgy tummies kids sometimes have. There is no family history of allergies or coeliac disease, but I kept an eye out for symptoms just in case. I thought breakfast cereal might also be a trigger if Mina was coeliac, but it seemed to have no effect. Life went on as normal.

It was her teacher who prompted me to investigate. She took me aside one day and said she felt it would be wrong not to tell me how pronounced Mina’s protruding tummy had been the day before. It was the first time anyone outside our family had commented, so I thought it warranted more action.

I took Mina for blood tests, and they came back negative, which is apparently normal. We had a second test – also quite standard – and this one came back positive, meaning she would need a biopsy, as the next stage of the investigation. I was shocked when it confirmed she was coeliac.

When it came to telling Mina, my husband and I wanted to ensure it all started as positively as possible, so we held off until after Halloween, which was just a week or so away at the time. We figured that, after seven years of gluten, seven days more wouldn’t be the end of the world – and we didn’t know enough about it ourselves yet. It would have been hard for Mina to start the journey being told all the things she couldn’t have while all the other kids were horsing into their trick-or-treat hauls.

We joined the Coeliac Society of Ireland for her, read up about it ourselves and went off to buy gluten-free versions of her usual foods (breakfast cereal, pizza, bread, crisps, pasta), as well as utensils (chopping board, colander), in three sets: one for our home and one for each set of grandparents, who she often stays over with. We wanted this all to be easy and positive for everyone.

We also felt that, at seven years of age, she needed to understand her condition herself. We can’t be over her shoulder all the time, telling her what she can and can’t eat. We didn’t want her to passively be told about food; instead we wanted her to have confidence about her condition.

So we told her that her grandparents didn’t know about it, invited them over, said that she had something to tell them and left the room. We wanted to be sure Mina could understand her condition and tell people about it. She did a brilliant job – and they were excellent actors, with their “Oh, wow, can you tell me more about that?” follow-up questions.

This all meant that, from the first days, she was able to look at labels to watch out for the relevant ingredients, wording, branding and logos.

We try to make up for the disappointments: if Mina can’t tuck into chips or cake at a birthday party we compensate with our own private party as soon as possible, to cheer her up

From speaking to other coeliacs, I now realise that Mina had shown symptoms. One was that she had always been hungry. Three bowls of cereal in the morning was pretty normal. Eating a full adult meal and an hour later announcing she was hungry was also standard. I used to think this was just the norm for a growing child. In fact it’s quite normal for coeliacs.

Also, she had lost none of her baby teeth by the time she was diagnosed, when she was seven. The nutrients must have kicked into action when we started the gluten-free diet, as the tooth fairy had to go into overdrive. This, however, might have been just the age she was at.

We’re now three years down the road. There are occasional awkward times, but Mina is very philosophical about it, and we try to make up for the disappointments: if she can’t tuck into chips or cake at a birthday party we compensate with our own private party as soon as possible, to cheer her up.

I know that as she reaches her teenage years she might find certain situations hard, but, having been diagnosed so young, she doesn’t really know any other way of life – and in this respect she is lucky, I think.

She is also lucky to have such good support from relations, school friends and their families (she’s the special guest when she visits), teachers and the Coeliac Society itself. We keep taking it one step at a time. We have had the odd period of discomfort when I have felt she has been “glutened”, but, thankfully, she has got back to normal quite quickly. We are all learning. We’re very proud of her.