How to talk to teenagers about sex

Young people want more information about sex and relationships, and it’s up to parents and teachers to find a way to give it to them 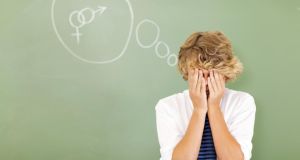 Are young people really sending each other naked pictures? Is pornography moulding their ideas of sex? What pressures face young people, and how can a good relationships and sexuality education programme help?

Politicians are talking about lowering the age of consent from 17 to 16. Meanwhile, there is concern about sexting; Internet Safety for Schools Ireland, a service run by Dr Maureen Griffin, a psychologist, says that as many as one in four young people has texted sexual or naked pictures of themselves. All the while, young people are being bombarded with sexual images.

It’s a world away from when the Department of Education’s relationships and sexuality education (RSE) programme was designed, in the mid 1990s, when the internet was in its infancy. Parents and teachers are concerned about the health of young people but are struggling to catch up. How can they talk to young people about sex?

Last week, this Sex Talk series highlighted some of the programme’s ongoing problems. Three issues stood out: some schools are cherry-picking which aspects of the programme they were willing to deliver; some teachers or external groups are censoring, withholding or misrepresenting information, particularly around contraception; and 62 per cent of schools inspected by the department plan their programmes persistently weakly.

At the Dáil na nÓg conference at Croke Park last November, young people from around Ireland ranked the poor provision of social, personal and health education (SPHE), which includes RSE, as their second-biggest concern. (The top concern was mental health.)

People working in RSE say the pressures and expectations on young people have increased with the advent of social media. In 2010 Unicef reported that friends and peers are one of young people’s main sources of information about sex. It also reported that one in five 16-year-olds in Ireland say they have had sex, with 82 per cent of those having had full penetrative sex. Ten per cent said they did know what kind of sex they had had.

Sex and relationships: what do students want?
The Department of Education has advised schools to use outside agencies for RSE with caution and as part of a broad programme: they should supplement rather than replace the role of the RSE teacher.

But students who spoke to The Irish Times, school inspectors and the Dáil na nÓg say they often find it easier to speak to an outside facilitator about sex rather than to a teacher they will have to see every day. The problems arise, the students say, when an agency is seen as didactic and agenda-driven, and does not truly listen to, and engage with, them.

Many external agencies provide talks (see “Who is teaching your kids about sex? The agencies that are invited in”, left). Accord runs the largest programme in the country. “People often assume that teenagers want to talk about sex, but they don’t; they want to talk about relationships,” says Anita Conlon, who co-ordinates the programme.

She is matter-of-fact when it comes to sex. “You might get a teenage boy who says they want to talk about positions, but we just say that we won’t, because there is no value in it. We talk about the effects of sex on a relationship and why teenagers might feel they should be sexually active when they are not actually ready.”

The 2010 Unicef study found that 54 per cent of Irish teenagers said they had watched pornography on the internet, and more than a third of those believed the images in pornography were an accurate reflection of sex.

When Conlon first started giving school talks, she advised parents that if their children were using computers, they should do so in a family room where their usage could be monitored. “That doesn’t apply any more: kids have phones, iPads and various ways of accessing inappropriate sites. This young group of 16-year-old teens are growing up with a completely distorted view of what sex is about, that it is nothing to do with intimacy.”

Sex-education experts suggest that girls are increasingly conforming to the images presented in pornography, which is seeping into mainstream culture.


Talking about sex
How does a parent begin to talk about sex with a young person? When is the right time? Too young and you steal the child’s innocence. Too old and they disengage.

Parents have very different views. Last week, during a discussion about sex education on The Ray D’Arcy Show, on Today FM, a parent texted to say she did not want her five-year-old to be taught the correct names for genitals at primary school, as it would destroy his innocence. The information was being given as part of the Stay Safe programme, which is designed to protect children from abuse by providing them with age-appropriate information. Other parents texted to say it made sense to teach the correct words. Reaching consensus seems difficult.

Ellen O’Malley-Dunlop, the head of Dublin Rape Crisis Centre, says Stay Safe has been successful. “In a recent case in which two children were sexually abused by a stranger – and I should point out that most abuse is carried out by people known to the child – these children knew to get away, they knew to tell and they knew they would be believed. That is progress.”

Research by the pharmaceutical firm Pfizer in 2010 found that most parents wrongly assume schools are covering sex education. Teachers and schools point out that they can’t be left to teach children everything; parents have a responsibility too.

Speakeasy is the Irish Family Planning Association’s eight-week programme to equip parents or guardians with the information, skills and confidence to talk to their children about relationships and sexuality. It covers puberty and reproduction, pressures on young people, contraception, sexually-transmitted diseases, and keeping children safe from sexual abuse and exploitation, as well as relationships and sexuality education in school. Classes are held one evening a week, for three hours.

“We tell parents that the conversation should be initiated at a very young age,” says Ghafoor-Butt. “The one-day sit-down conversation – the talk – doesn’t work. You can start to talk, and they will run out the door. So we tell parents to use everyday learning opportunities.

“At an early age they should understand about their own bodily space and what is or is not appropriate in terms of being touched. When they are a bit older, if you are in the pharmacy and see a pack of condoms or sanitary towels, explain what they are for, at an age-appropriate stage.”

Young people’s views
SpunOut.ie, a youth website aimed at improving health and wellbeing, asked a panel of young people what they think about these issues. “With regards to the age of consent – should it be lowered or should it stay the same – the view of young people was that it is irrelevant,” says Ian Power, SpunOut’s executive director. “A young person considering sex is not pondering whether it is, or is not, against the law.

“The Government wants to address the issues of sexting and the age of consent through legislation. The young people on our action panel say all of this is a distraction, a sideshow. They said that if adults are really so concerned about all these issues, then surely the way to tackle them is through relationships and sexuality education and through schools, but we are clearly hearing from young people that good sex education is sparse.”