How to make the grade

This is the time when revision piles up and it can all seem too much. Here are some tips to kickstart your study 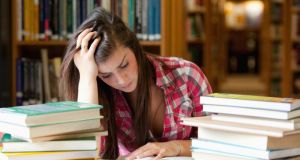 This is a dangerous time of the year if you’re feeling discouraged about the state of your study. It can seem like you have so much to get through, there’s no point in even beginning. The exams are too far away to shock you into cramming but they are just close enough to lead to paralysis. Don’t let that happen. You have plenty of time, but you do need to get going if you want to do yourself justice.

The main advice when it comes to study and revising for exams, is simply to open your books and begin.

Before you start
Don’t look at everything you have to do. That will make your brain shut down in fear. Break your subjects up into study sessions. Take one at a time and just focus. You’ll get through more than you think.

Organise yourself. Having a plan or a to-do list is a great idea but don’t spend a whole study session drawing something up. An outline is fine, you can always add to it later.

Be realistic. Keep study sessions short and effective. You need to be doing more than your homework at this stage.

Be honest about your internet usage. Think about it, if you spend half an hour in the morning and an hour in the evening, it all adds up. Two hours a day is 14 per week – 56 per month. Think how that would add up if you were to spend just half of it revising.

Effective study
Actively engage with your study. Read inquisitively, take notes about what you’re reading, do an exam question.

If you do that, you won’t have to learn off lots of material because you will be able to explain concepts in your own words.

Notes are notes. They are supposed to trigger further information in your head when you read them. Beware of copying down sections of text from your books. This is of limited value.

When you make notes, as you progress with your revision, try to distil those notes down to key words and phrases that will trigger the information in your head. By June, your notes should consist of cards and words rather than pages of writing.

While you need to be doing more than your homework, doing your homework well counts as part of your revision as it helps you to reinforce what you have learned in class.

Review what you have learned recently.

There’s a theory that if you don’t revise what you’ve learned within 24 hours of learning it, you can lose 80 per cent of that knowledge.

Exam papers and marking schemes
Get to know the exam papers. The structure and layout of the exam is basic but essential knowledge.

Familiarise yourself with the time allowed for each question and practise within that time.

Make sure you’re confident with the use of language in the exam paper. A single word in a question can change everything about your answer. Questions that begin with define, describe, explain, evaluate or compare all require different answers. Keep re-reading the question to ensure that you are actually answering the question asked.

Have a look at the chief examiners’ reports for your subjects on examinations.ie. These give sample answers and can be a great guide for the kind of style required in an answer.

If you get stuck, don’t look up an answer too quickly. Try to figure it out for yourself for at least a while. You’ll learn more, even if you have to look it up in the end.

Marking schemes are your window into how the examiner marks an exam. The reason that some students become incredibly effective at taking exams is because, as well as having studied diligently, they understand how the marking system works.

Remember, the schemes change but they give you an understanding of how many points of information are needed for a certain number of marks.

If it’s just not working
You try valiantly but sitting at a desk and taking notes is not working for you. Try a couple of alternatives:

Record your notes onto your phone or iPod and listen to them instead of reading them. This technique is really good for languages but it can work in other subjects too. If you’re an active person, it might help to go for a run or a walk while doing this. You must actively listen if this technique is going to work. There is no point in listening to notes while you’re on Twitter for example.

Find a study buddy. This needs to be someone you can work with, not someone with whom you can pretend to work while actually not doing anything.

You study one section or a subject, they study another, you meet up, copy each other’s notes and teach one another what you learned. Make sure you practise exam questions.

Ask for help from your parents or teachers.

They could have good suggestions about what might work for you.

Remember
Use your teachers. If you don’t understand something, ask! You can approach your teachers about something that comes up while you’re revising.

Ignore the people talking about how much or how little they’re studying. The ones who are doing loads will just stress you out while the others, well frankly, they are probably lying – watch how many people get honours in the mocks despite insisting they did no study.

Have something else in your life. Sport, walking, your favourite TV programmes – find something you enjoy in other words. When you’re studying, focus on that. When you’re having a break, forget the books. You need to use your study time effectively but you don’t need to devote all your time to study. Don’t listen to the tips! Every year, people are thrown because they expected some sure thing to come up on the paper and it doesn’t. Nobody knows what’s going to be on the paper. People who predict correctly are simply lucky. They are every bit as reckless as the people whose predictions don’t come to pass.

The college marking system is different to the one in school. Essentially, anything over 70 per cent makes for a first-class honour. This should be reserved for the very top students. A 2.1, at the moment, is the minimum standard many employers are looking for in this competitive jobs market. That’s between 60 and 69 per cent. A 2.2 is still an honours degree with recipients getting between 50 and 59 per cent. Below that is a third-class or a pass if you manage to get more than 40 per cent.

DCU
Some 16 per cent of DCU’s graduates got first-class honours last year while a huge 55 per cent managed a 2.1. Those getting a 2.2 accounted for 23 per cent while the remainder got a pass degree.

NUIM
NUIM isn’t handing out first-class honours as much as it used to. About 11 per cent of its students managed the top honour last year; 46 per cent got a 2.1 while 35 per cent had a 2.2. The remaining students were awarded either a third-class or a pass degree.

UCC
Another college with a high rate of first- class honours. About 18 per cent of UCC’s graduates got top marks; 48 per cent were awarded a 2.1 while a quarter got a 2.2. UCC is a medical school so its figures include graduates from those courses where the marking system is slightly different. Eight per cent of students graduated with a pass degree.

UCD
UCD’s marking has been very consistent in the past three years. Some 12 per cent of students got first-class honours, which was the same as last year; 53 per cent of students graduated with a 2.1 while 31 percent got a 2.2. Four per cent graduated with a pass degree. Those percentages have remained consistent in recent years. Those percentages include medical school graduates.