Some Cork schoolboys are learning, and teaching, about emotions and stress 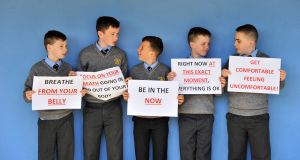 In recent years most of the emphasis in mental health education has been on teenagers and adults, with less focus on children. But now a teacher in a Cork city primary school has designed his own programme promoting positive mental health for his sixth class students, aged 12 and 13.

Mark Russell of the all-boys Blarney Street School was approached by parents, who told him their children were “full of worry when they were at home”, particularly concerning the move to secondary school. It was the first time Russell had been approached in this way and the parents asked if he had any suggestions.

“I had done a lot of research over the years into positive mental health, as I’m into sport and I work with teams in Blackrock GAA Club, Cork,” he says. “I realised a lot of it was transferable to children.”

Fourth class primary school students follow Friends for Life, a childhood emotional resilience programme. “It’s a brilliant programme,” says Russell, “but it’s not advanced enough for sixth class. They want to compare themselves to sport stars and what’s relevant to them.” So he adapted Friends for Life, combining it with his own material to make it age-appropriate.

Russell taught them about how to deal with stress and worry through meditating. One student, Ryan Sharpe, explains the simplicity of meditation: “You don’t need any fancy equipment or clothes. All you need is to be able to breathe.” Another student, Alan Wiczolek, says they learned how to calm down in stressful situations. “If you are nervous in front of tests or an audience, it helps.”

The 16 boys in the class took part in a body exercise. Evan O’Flaherty describes the process.

“We were in groups of four. We got sheets of papers, then we got the smallest people in the class to lie down on them, and we outlined them. Each group got a set emotion – anxiety, worry, anger and nervousness. We had to write what would happen with that emotion.” Among the bodily clues, they identified headaches, sweating, butterflies in the stomach and shaky hands.

Russell taught them coping mechanisms for the body clues, putting words over them to cancel out the feelings. The resulting body poster hangs on the door of their classroom with various slogans, including reminders to “be in the now”, “smile” and “focus on your breath”. There is also a clock face with “Now” written in place of each of the numbers, and a “Mindfull or Mindful?” illustration.

The exercise might have ended there, but the annual Edmund Rice Schools Trust Conference was being held in Newbridge, Co Kildare in April, and the theme was mental health. (Blarney Street is a former Christian Brothers School, and a member of the trust.) Unable to send a representative to present at the conference, principal Billy Lynch asked the boys to turn their project into a video.

Set to an instrumental version of REM’s Mad World, the video contains now dialogue. Instead, the boys hold up flashcards based on the work done in the body exercise. The central message is “Get comfortable feeling uncomfortable”. They edited the lighting themselves, moving from dark colours to bright, reflecting the move from not coping to coping.

Russell says the video is emotive yet simple. “Even adults who have never referenced mindfulness before could look at it and understand what it’s all about.”

The boys loved the finished product, as did their parents. It was very well received at the conference and posted on YouTube. Schools as far away as Argentina and South Africa have contacted the class with positive feedback.

Russell says the many things children worry about, from having the right runners to completing their homework, may seem insignificant to adults. But in the children’s world these little worries might be everything. “As adults we say it’s nothing, don’t worry about it,” he adds. “It wasn’t until they realised it was normal to feel these things that they learned to handle these emotions.”

A child from a Cork primary school took his own life last year, which Russell believes has heightened parents’ worries. “Mental health isn’t just a matter for teenagers anymore, or secondary schools,” he says. “He was a primary school child who didn’t know how to deal with certain situations. Children are exposed to so much on social media.”

While suicide is not specifically mentioned in primary school, Russell says there is “nothing wrong with exposing them to coping mechanisms, without referencing anything outside of that”.

He says it is easy for teachers to get caught up in the academics and results of everything. “My primary concern is that the children are safe and happy when they come to school, and that they feel secure. I don’t want them carrying unnecessary pressures into secondary school.”

Asked what worries them about secondary school, the boys cited needles, new friends, new teachers, sports’ days, tests and keeping up, among other anxieties. Some are even thinking as far ahead as the Leaving Certificate.

Russell’s next step is to work on cognitive aspects. “While this is more about a coping mechanism for an incident, the next stage would be to get them to figure out how they process thought, and the lifelong benefit of positive thinking.”

There’s also a positivity box inviting suggestions on how to improve the school. “The suggestions are all studied, and the students then select and read some of them out on the intercom every week,” Lynch says. “Some children even used their own initiative to start cleaning the school grounds, which expanded into a community clean-up.”

The Lord Mayor of Cork recognised the school’s efforts and hosted the student council on a visit to city hall.

As a result of the work they’ve done, Russell has noticed a huge change in his students’ approach to matches and tests. The nerves aren’t as apparent, he says. They realise they’re not the only ones who feel nervous or anxious. “It’s normal to feel the butterflies, the headaches and the sweating,” he says. “To know that they’re not alone is a great help to them.”

The sixth-class boys are practising what they’ve learned, especially the breathing. Jack Foley says he does it before a big match – “It calms me down.” Killian Fitzpatrick used it sitting his secondary school entrance exams. “I was quite nervous,” he says, “but I focused on my breath for two minutes.”

Jamie McSweeney was worried when his team took part in an online gaming tournament. “I did a few breaths. They still lost but it didn’t feel as bad.”

The students are very keen to share their experience with others. But there’s a humorous note of caution from Sean Paul Cooke.

“Always do meditation in the dressing room. If you do it on the pitch, it will be counted as daydreaming, and you may be kicked off by the manager!”

PANEL: 10 tips from Mr Russell’s sixth class on coping with stress and anxiety

Stay calm and positive. Be yourself and love what you do.

Don’t think about what’s next.

Have a good attitude.

Nothing is going to be as bad as you think it is.

Go your own way instead of copying other people’s ways.

Right now everything is okay. Be in the now.

Don’t be afraid of a challenge. If your life has no challenge, you are not really living it.