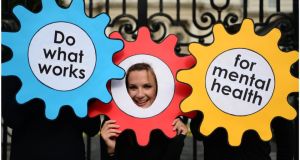 Brian O’Connell has told the Merriman Summer School that our social conditioning particularly around male emotions makes it difficult at times not to feel like damaged goods; that you are somehow abnormal if you don’t listen to that God-awful phrase — ‘man-up’. Photograph: Bryan O’Brien / The Irish Times

The challenge for the generation of male teenagers today is not to ‘man up’, but to ‘open up’.

That is the view of broadcaster and author, Brian O’Connell who said today that our social conditioning particularly around male emotions makes it difficult at times not to feel like damaged goods; that you are somehow abnormal if you don’t listen to that God-awful phrase — ‘man-up’.

Addressing the Merriman Summer School in Ennis this afternoon, Mr O’Connell said that the challenge for his teenage son’s generation is to somehow interrogate the emotional inheritance they will receive; to question perceived national and cultural stereotypes around who they are meant to act emotionally and to not feel socially scarred as a result of prompting honest and open dialogue.

Author of a book ‘Wasted’ that documented his alcohol experiences, Mr O’Connell said that there was a very cathartic element to writing the book “but I think you do have to be prepared for the fact that you need to get to a very secure place in order not to feel judged by Irish society as a result of publicly acknowledging emotional or mental health related issues”.

Mr O’Connell said: “I think we could be doing a lot more to encourage frank and open dialogue around male emotions and sexual behaviour and having spent a lot of time in school talking with second level students, I do feel that our inherited inhibitions around opening up are causing a vacuum, which is being filled by damaging behaviour, particularly in the case of young male adolescents.

He added “I find it inexcusable that there is as little dialogue in most secondary schools today around issues of sexuality, mental health, drugs, alcohol and addiction, as there was when I was in secondary school in the 1990s.

“There is meant to be space in the curriculum now for these topics, but in my experience, teachers feel uncomfortable teaching in these areas, often contracting out the topics to religious or vested interest groups. I have sympathy for teachers, in a way it’s not their primary role to teach children to be emotionally articulate, or to be upfront about how they are feeling or to encourage them to question peer norms around sex, or alcohol, or drugs.”

“But, the very fact that there is little open dialogue being promoted by adults among our adolescents, makes labelling ‘binging teens’ as our problem, all the more hypocritical and emotionally scarring.”

Mr O’Connell also revealed that “time and time again, young men who might call me wanting to do something about their relationship with alcohol, will share similar experiences of how much they feel society doesn’t want them to get better.”

He said: “They are terrified in case anyone would find out they can’t ‘hold their drink’ and they worry that unless they identify with the extreme definition Irish society attaches to what an alcoholic is, they shouldn’t seek help. Unfortunately for many, this means they won’t seek help until they are at rock bottom, in jail maybe, with serious medical issues.”

Recounting a personal story to the audience this afternoon from his paper entitled Rage and Empathy, poet Theo Dorgan said last weekend he stood with six of his brothers and his seven sisters to celebrate the 50th birthday of another brother, Pat.

He said: “We toasted a man who has transcended biological determinism to become the heart and soul of our family. Pat is Downs Syndrome, and by a measure the smartest and most loving of us all.”

He recalled: “I was 11 when he was born, I held him in my arms while the doctor told my bedridden and distraught mother not to worry, that “those” children rarely if ever lived into their 20s.

He added: “My father was at work, we older children were gathered on the landing. I tell you frankly, that was my first intimation of rage. For a fraction of a second I had a vivid hallucination of smashing the doctor down the stairs.”

“I grant you the poor man was simply mouthing the platitudes of his time, that he meant to console my mother with the thought that she would not have that burden to bear for more than 20 years, but already I knew better, and I was blindly furious with him — but some of the youngest began to cry, sensing the pain in the air, and Pat began to stir uneasily in my arms.”

“I remember us gathering in around my mother, the doctor, leaving, already dismissed as beyond relevance; I remember the unspoken pact that took shape in the air around us, all of us standing there. We would love this child, our brother; we would guard and protect him, no matter what. Against whatever might rise up in the world against him. In absolute empathy and solidarity. Sidestepping rage at fate’s cruel lottery as unproductive and beside the point, on into unquestioning and enduring love.”