Are Irish mammies ready for their children to embrace apprenticeships?

Snobbery is one reason why parents are fixated on higher education to the exclusion of all else. But ‘earn-and-learn’ options are making a startling comeback 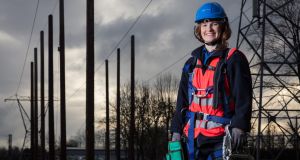 Meg O’Kelly (24) from Dublin is one of the chosen few on the ESB’s apprentice programme for network technicians. 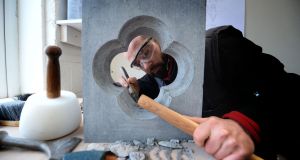 Jason Morris from Wexford is on an apprenticeship in Stonecutting & Masonry at Kerry ETB. Photograph: Domnick Walsh 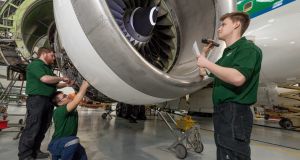 A recent survey investigating the biggest influence on young people’s career choices has confirmed what many of us suspected all along: it’s the Irish mammy.

The same report, commissioned by the Department of Education, also expressed concern that many pupils were not getting enough information on alternatives to higher education – such as apprenticeships.

So, why are Irish parents so reluctant to send their sons or daughters down the apprenticeship route?

Education observers say snobbery and status are some of the reasons. The collapse of the construction industry didn’t help either, prompting school-leavers to flee from any apprenticeships linked to trades.

But “earn-and-learn” options are making a startling come-back.

Along with traditional craft-based options, a new generation of apprenticeships offer a chance to get a degree while working in white-collar sectors ranging from accounting to auctioneering and insurance to ICT.

The penny is beginning to drop with many parents: apprenticeships can be a smarter option for school-leavers who are hands-on learners and know where they want to work – as well as being a whole lot more affordable.

At present, there are about 16,000 apprenticeships in programmes lasting between two and four years.

Solas, the further education and training authority, is aimingto double the number of learners taking this route over the coming years.

Maria Walshe of Solas says more established apprenticeships such as electrical, motor mechanics and construction tend to have the highest registrations.

However, numbers are growing fast for newer options in areas like insurance, ICT, cheffing, accounting and specialised engineering and manufacturing.

By 2020, she estimates that Ireland will have more than 70 different apprenticeships on offer, with awards ranging from certificate to PhD level.

Much of the learning these days take place in institutes of technology or Education and Training Boards.

“This exciting expansion to the apprenticeship system in Ireland opens up a huge range of additional opportunities for young people who are considering their post-second-level education options,” she says.

“The apprenticeship route provides the opportunity to earn while you learn in that you are employed and working for the duration of the apprenticeship and learning both on the job and in an off-the-job environment.”

Aside from the hands-on training aspect, the other major difference between choosing an apprenticeship over third-level education is the very real fact that apprentices are paid for the duration of their programme.

The financial sector is one of the areas where apprenticeships are gaining a newfound popularity.

There are currently 50 International Financial Services (IFS) apprentices in varying roles; the first group is due to graduate in 2019.

The programmes are two years in duration and the while apprentices attend college for one day a week during the academic year, they can earn between €23,000 and €32,000 a year for the duration of their apprenticeship.

Carol Kenna, IFS apprenticeship programme manager, says it is aimed at school-leavers who have attained their Leaving Certificate or equivalent and perhaps have additional qualifications in any discipline.

“Some of the associate-level apprentices have backgrounds in childcare, engineering, hospitality and other disciplines and careers prior to taking up this opportunity and this increases the level of diversity in the sector,” she says.

IFS runs a separate specialist-level apprenticeship aimed at career changers with a minimum of a 2:2 degree in any discipline.

A more traditional apprenticeship is one with ESB Networks. It takes on about 72 electrical apprentices every year: last year ESB Networks received almost 6,000 applications for these coveted positions.

Meg O’Kelly is one of the chosen few on the primary apprentice programme for network technicians – and when she has completed the four-year course, will have an advanced level 6 qualification which is recognised worldwide (see below).

Apprenticeships are also making inroads into the fast-changing technology sector.

FIT -– or Fast-track to Information Technology – is an industry-led organisation which is providing entry routes into the sector.

“Over the years we have made it our mission to broaden the pipeline and get people to consider an apprenticeship in IT, as it was previously thought that only those with a STEM [science, technology, engineering and mathematics] background or relevant degree could consider a career in the sector,” says Peter Davitt, FIT’s chief executive.

He says there are roles available for people from all backgrounds as long as they have enthusiasm, passion and an interest in technology.

Matthew Cooke is currently completing an apprenticeship in the sector and is very enthusiastic about the programme he attends in Baldoyle Training Centre, Dublin.

“I have always had an interest in the IT industry but was unsure of how to get my foot in the door,” he says.

“But the apprenticeship programme provided me with the knowledge and hands-on experience I needed to develop my skills to meet industry standards. Being an apprentice is an exciting position, as you are always learning and striving to improve your skills.”

Maria Walshe of Solas agrees: instead of seeing apprenticeships as an alternative to third-level education, she encourages young people – or their parents – to take a genuine look at all the options and decide which one works best for the individual student.

“In recent years, there has been a welcome lift in discussion about the hugely diverse range of non-third-level education choices and a growing awareness that there are many routes to successful careers,” she says.

My apprenticeship: Four years to ‘earn and learn’ followed by starting salary of €35,500. Meg O’Kelly (24) from Dublin is one of the chosen few on the ESB’s apprentice programme for network technicians.

“I am in my first year and chose to do an apprenticeship because I wanted to become an electrician,” she says.

“I previously worked in the film industry as a lighting technician and learned a lot. The more I talked to other electricians, the more I realised how interesting it is and how valuable it is to have a trade skill.”

O’Kelly’s apprenticeship runs over four years and is split into phases which take place on-site or in college.

“These would include working on the overhead power lines, underground power lines, electrical stations and lots more. Because there is so much variety, no two days are the same.

“By the end of my four years I will be a qualified network technician and a qualified electrician,” she says.

“I am really enjoying it so far – every day is different and there are always new things to learn. It’s a great environment to work in and everyone is very friendly. One of my favourite aspects to the job would be helping people. With the world we live in today it’s very difficult to do anything without electricity so it will be very rewarding to help give people their power back after problems such as storm damage.”