Irish youths are turning to pornography for sex education 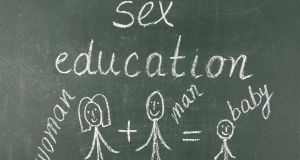 A review of sex education in schools has been launched. Photograph: Getty

The findings are based on a poll over the past month of more than 1,000 people, aged 14-24, by Youth Work Ireland, the largest youth organisation in the State.

The research also indicates that young people are not finding parents or teachers a useful source of information about healthy sexual relationships. The vast majority – more than 90 per cent – say the internet is their most trusted source of information. They are also far more likely to turn to friends, followed by health professionals and youth workers for advice.

By contrast, a minority of young people say they talk to their parents or teachers about sex.

Almost half of the respondents say their generation experiences more inappropriate sexual behaviour than their parents.

However, a similar proportion say they are more empowered compared with their parents’ generation to say no to this behaviour. Half of all respondents attribute this sense of empowerment to global movements such as #MeToo.

Boys are more likely than girls to reflect on their own behaviour because of these movements.

Nonetheless a large proportion – 42 per cent – say they do not feel confident that good help and supports are available in their locality for someone who experienced inappropriate sexual behaviour.

“Increasingly we see the critical role of quality education for young people on relationships and healthy approaches to sexuality.

“Young people and others see key shortcomings in the schools system. Youth workers and volunteers often have to fill this gap.

“We now need a guarantee of universal quality education in this area and the youth work sector can play an important part.”

Minister for Children Katherine Zappone said a “watershed” moment has been reached and that she was actively engaged with young people on how we can do better in combating sexual abuse and harassment. The involvement and voices of young people is crucial to raise awareness about issues such as consent, she said.

“This is key. We must also listen to the concerns, fears and experiences of children and teenagers; they are crucial if we are to find solutions which work,” she said.

Minister for Education Richard Bruton has also launched a review of relationships and sex education in schools, with a focus on the issue of consent.

A key criticism of sex education in schools is that patron bodies – such as religious groups – can adjust the content of courses to comply with their ethos.

Draft legislation which seeks objective and fact-based sex education across all schools, tabled by Solidarity TD Paul Murphy, passed second stage in the Dáil without a vote.

Putting the new coronavirus firmly in the picture