International profile means students tend to go on to college in the UK, Europe and the US 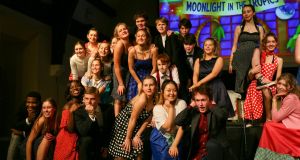 Students taking part in a school production of Grease in November.

Unusual fact: Regular classes take place on Saturday mornings, although the students do get slightly longer holidays at Easter and Christmas instead.

One of the most exclusive – and privileged – fee-paying schools in Ireland is also one of the most diverse, with about 40 per cent of the school population from overseas, including Europe, China and Africa. The school is popular with European parents who want a “British-style” boarding school, where their children can learn English and also do enough subjects to be eligible for entry to German universities.

Boobbyer, an Englishman who took up the role of “warden” (headmaster) in 2016 after running a school in a disadvantaged part of South Africa, is critical of feeder school lists. “The less ambitious you are [for students to travel and study abroad], the higher you are up the league tables. Most of our students get 500 points but, every year, we have to explain this to parents. That said, I’m glad there isn’t a table based solely on academic results as UK schools have manipulated this by stopping certain subjects, refusing pupils or entering them privately.”

The school does not select for ability and so there is a range of ability, says Boobbyer. “We have a fantastic learning support department and some children who have special needs assistants.”

Class sizes are small, with only about 15 per class. “This smaller staff-student ratio means we can give more attention to our students. Supervised study takes place in the evenings, running up to 2½ hours for the senior classes.”

The school recently opened a new social centre, because seven-day boarders need a place to hang out, which includes a cafe, a small gallery to display student art, a music room and other activities. Students play an hour of sport every day, six days a week, with Sundays consisting of little more than chapel service and students having a chance to relax and do what they want.

The school tends to invoke images of a Hogwarts-style castle. Boobbyer is keen to embrace the school’s roots and traditions but says that the facilities – particularly the science labs – are the best in Ireland.

Whether the State should pay teacher salaries in schools like this – with so much more resources than non-fee paying schools – is another matter.

School and college: Making the transition Catherine O’Connor has some tips for those starting at third level

Campus life What's hot and what's not in Ireland's universities