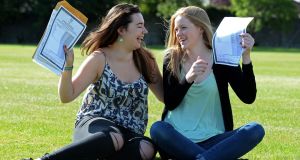 However, a number of schools outside this traditional group also rank towards the top of league tables, including community and non-fee paying schools. Coláiste Eoin in Stillorgan, Co Dublin, an all-boys gaelscoil, heads the overall rankings, followed by the fee-paying Cistercian College in Roscrea, Co Tipperary,

But Magh Éne College, Co Donegal and Coláiste Gleann Lí (formerly Tralee Community College) in Co Kerry appear in the top-five for the first time. Principals at these schools say a greater focus on empowering students to direct their own study, training for staff on new and engaging ways of teaching and closer links with third-level colleges are among the factors yielding dividends in better exam results.

Social class, however, remains a major factor in the performance of schools, especially in the Dublin area. Latest figures show students in more affluent areas in the capital are progressing to college at a rate of up to four time those in disadvantaged areas.

The social class divide is most obvious in the feeder school list for high points courses in universities and other third-level institutions.

Schools in affluent areas and fee-paying schools dominate this list. Coláiste Eoin in Stillorgan tops it; followed by Gonzaga College, Dublin 6; Castleknock College; the Teresian School in Dublin 4; and Cistercian College in Roscrea.

Critics of the feeder school rankings say they can provide a misleading view of school performance, given that schools in privileged areas have access to a much greater range of advantages such as better resources, access to grinds and greater parental support.

Some over-subscribed fee-paying schools and gaelscoileanna are also in a position to cherry-pick students, unlike those in less well-off areas which therefore tend to have a higher proportion of students with additional needs.

Finín Máirtín, principal of Coláiste Eoin, accepts his school is in an advantaged area but says a combination of committed parents and teachers plays a key role in its performance. “If a parent decides to send their child to an all-Irish school, they perhaps know they will have to be more involved in their child’s education. It’s nice to top lists but it’s not something we set out to do.”

Pat Tighe, acting principal at Magh Éne College, the only post-primary school in Bundoran, linked the school’s improved performance over recent years to innovations in teaching and learning.

“We’re doing a lot more group work which is student-centred, rather than the traditional ‘chalk and talk’ approach,” he said.In general, feeder school rankings are based on schools who sent the highest percentage of students to college this year. They also include those who deferred college or who repeated exams, which explains why some individual schools have progression rates in excess of 100 per cent. It is important to note that falling enrolment at some schools has distorted their perceived progression rates in the main tables (pages 5-10), skewing their progression rates upwards. Because of this, on our smaller charts detailing geography, gender, high points courses, etc, we have excluded schools where the number of students sitting the Leaving Cert fell by up to 20 per cent between 2014 and 2015. We also exclude schools with 20 or fewer Leaving Cert students, as these figures can results in distorted findings.