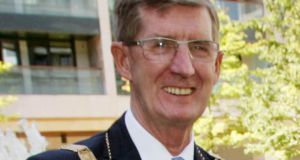 Motions on reducing property tax by a further 15 per cent for homeowners and a new plan to restrict councillors speaking times at monthly meetings will be debated at Dún Laoghaire-Rathdown County Council tonight.

While it is expected most of the public representatives will vote to cut local property tax, the proposal to change the number of motions a councillor can submit from three to one has already met opposition, with some councillors calling it “undemocratic”.

The proposal also includes limiting speaking time to a total of four minutes during the monthly three hour meetings.

A number of councillors walked out in protest at the organisation, procedure and protocol (OPP) committee meeting last week, after the motion was tabled by the Fine Gael and Fianna Fáil parties.

“It was an old-style power grab by two parties to stifle debate. Debate will be closed down,” he said.

“It is an attack on the rights, duties and functions of public representatives and on the constitutional role of the council as the democratic forum for the people of the county.”

Fine Gael councillor John Bailey, who tabled to plan to reduce the number of motions in the OPP meeting, criticised councillors who walked out of the meeting.

“They should have sat down and discussed it, instead of walking out in the last meeting. This is a way of seeing how we can improve,” he said.

Cllr Bailey said there had to be a change in procedures with the increase of the number of councillors from 28 to 40 since last year.

“It has become much more difficult to speak, you can get bogged down sometimes,” he said.

“Submitting motions on behalf of constituents is a vital part of a councillor’s work and is an excellent example of local democracy in action,” he said.

The decision whether to reduce property tax for homeowners will also be debated at the meeting but is expected to be passed comfortably.