Cog Notes: Gardái ride to the rescue and Bono pops up again 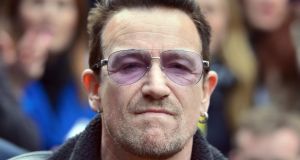 Bono made it clear that he was not impressed with “irony . . . on heavy rotation, the knowingness, the smirk, the tired joke”. Photograph: Anthony Devlin/PA Wire

One Leaving Cert student will never forget the first day of his exams after he had to get a Garda escort to his school.

Ian Fitzhenry (17) was saved by the bell when his brother rang a taxi after he failed to get the bus to bring him to his first exam.

The CBS student who lives in Patrickswell, Co Limerick hadn’t realised the change in the bus timetable and began to panic when there was no sign of the 8.50am bus.

“I texted my brothers and sisters but they were all in bed. My older brother Alan rang back and said he would get one of my other brothers to meet me down the road with the money for a taxi.

“As we were driving in, the taxi-driver noticed a Garda car behind us and he explained what had happened and we got a Garda escort into town.”

The lucky student arrived just minutes before his Leaving Cert English paper one was due to begin.

Ian’s mother Trish, who started work at 5am at Centra on the Dock Road, was unaware of the drama until she got her break at 11.30am.

“Thank God for the taxi driver and for everyone who helped him get there on time. Ian is so laid back, nothing really fazes him. He is so laid back he is nearly horizontal. The only thing that ever bothers him is if his skateboard is broken.”

Ian has already checked the bus timetable for today.

“I’ll probably be about two hours early,” he joked.

Two years ago this week, Ibrahim Halawa (19) was starting his Leaving Cert at the Institute of Education on Dublin’s Leeson Street. Yesterday, he spent his 653rd day in an Egyptian prison.

Halawa from Firhouse in south Dublin had his trial for participating in a political protest in August 2013 postponed again yesterday. His plight is a reminder that the rights enjoyed by students in Ireland are not universally recognised – and that includes the right to education.

It is timely, then, that more than 30 countries including Ireland have just signed up to a Safe Schools Declaration aimed at protecting students and places of education in conflict situations.

The declaration comes in the wake of violent assaults, such as Taliban gunmen killing more than 140 students and staff at a school in Peshawar last December and the al-Shabab attack which killed more than 140 people at Garissa University in April.

The declaration sets out guidelines to encourage armed forces and armed groups to exercise restraint with respect to the military use of education facilities.

Of the students sitting this year’s Leaving Cert, 51 are from the International School of the Martyrs in Tripoli, Libya. Because of the unstable situation there, the exams are offered to candidates in Ireland and Malta instead.

Bono? Ever hear of him? For those sitting yesterday’s Leaving Cert English paper, you couldn’t take it for granted, so the examiners introduced him as a “well-known humanitarian”.

The exam featured a speech that began: “My name is Bono and I am a rockstar.”

It’s openers like that that give the whiff of Marmite to the U2 frontman.

The examiner was a fan though, judging by the questions that followed. Do you agree that Bono is both engaging and inspiring?

But poking fun wasn’t an option. Bono made it clear that he was not impressed with “irony . . . on heavy rotation, the knowingness, the smirk, the tired joke”.

The twitterati took that as a challenge and flooded the wire with molten irony.

“Ffs, Bono. First iTunes and now the Leaving Cert. You always show up where you’re not wanted,” snarked “Emily Dickinson”.

Geography: “Revise the case studies you’ve done on man’s interaction with rivers, coasts and glaciation. Make sure you know your examples of core/peripheral/continental/problem regions well. Practise drawing sketch maps of each. Remember to bring a ruler, HB pencil and coloured pencils for drawing sketch maps and diagrams.”

Maths: “The first section of paper one is all about the skills and the second section is problem-solving. The day before the exam, focus on skills; all the problem-solving follows on from skills.”