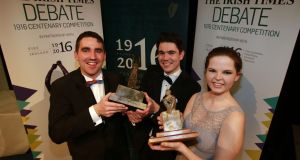 A team from the Solicitors’ Apprentice Debating Society of Ireland has won the final of The Irish Times annual student debate while the individual debating prize winner was Clíodhna Ní Cheileachair from UCD. Photograph: Nick Bradshaw

Those opposing the proposition that 2016 should be the last year in which Ireland commemorates the Easter Rising were the big winners in The Irish Times Debate grand final on Friday night.

The grand final was held in the Royal College of Surgeons in Ireland (RCSI), a building that saw a lot of fighting during the Easter Rising.

Ms Ní Chéileachair (22) told the audience that commemoration was important so we could “attach ourselves to a story that is greater than ourselves”.

The 1916 Rising was a revolution that marked the start of the British retreat from empire, she said. Commemoration matters because it is the way that we fill in the gaps and tell the story of the ordinary people involved. As a result of the comprehensive nature of this year’s commemoration process, stories that had not previously been told could now be told. We are able to move beyond historical cliche, she stated, because a “national space” was being created to commemorate the events properly.

Accepting her award from the chairman of Ireland 2016 Maurice Manning, Ms Ní Chéileachair, who is studying law with philosophy at UCD, said she was surprised to win and expected her debating colleague from UCD Cian Leahy, who finished runner-up in the individual category, to win instead. “I was sad for him that he lost and happy for myself that I won.”

She hopes to become a solicitor when she graduates and ultimately hopes to do an “MA or a PhD somewhere interesting like the US”.

Mr O’Mahony was a runner-up as a team member in 2011. “This is a long-time dream of mine. I’m delighted beyond words.”

He argued that the Easter 1916 commemoration was “too important to forget and too dangerous to ignore. If the State ignores its role, it is not a neutral act.”

He also argued that abdicating responsibility handed over the commemorations to the “men in balaclavas”.

His team-mate Mr Vickery said his instincts had been to argue in favour of the proposition but “it makes it easier to realise what they [the opposition] would come up with.”

He argued that the ideals of the Easter Rising are “louder than cannon fire. Those ideals are equality, democracy, independence. They are as relevant today as they were radical then.”

He suggested that “identity in Ireland is so rooted in 1916 that people come out of the womb advocating for one faction another. You’ll know what I mean if you have ever met anyone from Ogra Fianna Fáil. ”

Every commemoration allows for re-evaluation of the time, he explained, and so people such as Joe Duffy have been able to shed new light on the period with his book on the children who were killed in the Rising.

The two other debaters in the individual competition were UCC Philosoph’s Cormac O’Brien and Cadet John Nevin from the Cadet School.

TCD Phil had two teams in the grand final represented by Claire Ní Cheallaigh/Hannah Beresford and runners-up Sarah Mortell/Caoimhe Stafford. Ms Mortell had a link with the Rising as her great granduncle Thomas Callan of Chamber Street was an Irish Volunteer who took up arms in the South Dublin Union during Easter Week.