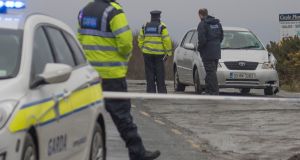 Garda forensics officers at the scene of the incident near Buncrana on Thursday morning. Photograph: North West Newspix

Gardaí have confirmed that a woman killed on a Co Donegal road on Wednesday night had been assisted by officers just moments before the incident.

Supt Eugene McGovern confirmed the 59-year-old had been picked up close to a petrol station outside Buncrana by officers who were concerned for her welfare. They left the woman off at her requested destination after giving her assistance at 8.42pm.

However, at 9.15pm gardaí received a report that a woman had been fatally injured after being struck by a car at Umrican, between Buncrana and Carndonagh.

A woman, understood to be the driver of the car that struck the victim, was interviewed by gardaí.

Supt McGovern confirmed that the Garda Síochána Ombudsman Commission (Gsoc) has been informed of the incident. The woman, who is from the locality, is a married and has children.

A postmortem was expected to be carried out at Letterkenny University Hospital on Thursday.

Supt McGovern appealed to anybody who was in the area at the time to come forward.

The death is the fourth on Donegal’s roads this year and the second in four days.

Emmet McClelland (25) died at Bridgend when he was struck by a car after celebrating his son’s christening on Saturday night last.