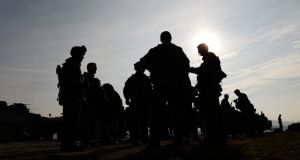 Defence Force pay rates compare very favourably with other parts of the public service and some claims about conditions were “misleading” and “wildly inaccurate”, the Department of Defence has said.

The problems now facing the Defence Forces were also being experienced by other international militaries, the department has claimed in a briefing document for circulation to TDs and Senators.

However, the department said while the turnover of personnel in the Defence Forces was higher than across the public service, “this is a feature of military organisations internationally”.

While acknowledging “particular challenges exist in certain specialist areas, for example pilots” in the Air Corps, this trend was “not unique to Ireland”.

Retired Comdt Cathal Berry and the Representation Association for Commissioned Officers (Raco), which represents officers in the Army, Naval Service and Air Corps, spoke out this week about what they see as a crisis in forces.

However, the department’s briefing document for TDs and Senators is not a rebuttal of Comdt Berry’s or Raco’s remarks and does not refer to them or their specific concerns.

Instead, the document is more general and in many places seeks to rebut claims typically made in recent years by serving and retired military personnel.

For its part, Raco has complained about what they see as the poor remuneration for enlisted personnel, rather than for their own ranks. The officers also say the Defence Forces is in the grips of staffing crisis so pronounced the viability of the forces was at risk.

Raco appeared before the Oireachtas Committee on Foreign Affairs, Trade and Defence on Thursday for the first time, to raise its concerns.

While officials from the department were not before the committee, they privately submitted a lengthy 23-page document to the committee.

It said long-standing claims that enlisted personnel were so poorly paid that 20 per cent were in receipt of the working family payment, formerly known as family income support, were “widely inaccurate and a gross exaggeration, not based on fact”. The true number of serving personnel receiving the social welfare payment was 90 members.

It added that entry-level salaries, some €27,759 for a three-star private, “compare favourably to other jobs, with similar entry-level criteria, in the public service”.

The department said claims that millions of euro was returned from the defence sector to the exchequer each year and should instead “be used to increase pay” were “misleading”. The amount returned to the exchequer over five years was €3.5 million and this could not be ring-fenced to pay higher allowances.

The briefing document was submitted at a time of extreme pressure for the department and Minister of State for Defence Paul Kehoe TD. This week, retired Comdt Berry, the former head of the Army Ranger wing, spoke out in The Irish Times about what he said was a clear crisis in the Defence Forces.

He said Mr Kehoe was ineffective and “an empty suit” whose presence in the department had created a power vacuum. That had been filled by senior departmental officials who had no experience of military life and sought to control the forces, down to rewriting its press releases.