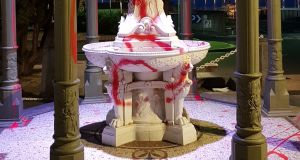 Gardaí are investigating after a statue commissioned to commemorate the royal visit of Queen Victoria to Dún Laoghaire in 1900 was vandalised with red paint on Wednesday.

In a short statement, a Garda spokesman said: “Gardaí are investigating an incident of criminal damage that occurred on the Queens Road, Dún Laoghaire, Co Dublin at 9.55pm on June 24th.”

The incident relates to the Victoria Fountain which was commissioned to commemorate the royal visit in 1900, but the queen died before it was erected.

The fountain itself is covered with a pierced dome supported by eight arches. Queen Victoria is detailed in profile on the monument, together with birds and other ornamentation.

The fountain was one of a large number celebrating Queen Victoria, erected in Ireland and throughout other British colonies, to a standardised design by Glasgow manufacturers Walter McFarland & Co.

Located at the bottom of Marine Road, the cast-iron fountain lost its 15m (18 ft) high canopy when it was vandalised by members of the IRA in 1981. The group responsible claimed to be acting on behalf of the H-Block prisoners. Several men were jailed for the damage caused to it.

The board of Dún Laoghaire Harbour Company voted unanimously in 2000 to restore the fountain as part of the programme of upgrading the harbour. It was grant-aided by the Heritage Council as a project of historic and architectural importance.

However, work on the site was stopped in 2002 after construction workers received threats.

Workmen were approached by individuals and told if they didn’t stop work “men in balaclavas would deal with them”. The construction company employing them decided to cease work indefinitely on the project.

Donal Marren of Dún Laoghaire Harbour Company and chairman of Dún Laoghaire/Rathdown County Council, told The Irish Times at the time of his regret that work on the Victoria Fountain had to be suspended.

“This is deeply upsetting to us all,” he said. “An exact cast-iron replica of the original fountain is now completed and ready for delivery to Dún Laoghaire Harbour. We have planned to unveil the newly-restored fountain on December 15th.”

A spokeswoman for Dún Laoghaire-Rathdown County Council said the local authority was aware of Wednesday’s incident and that it would be undertaking “a clean-up of the monument” on Thursday.