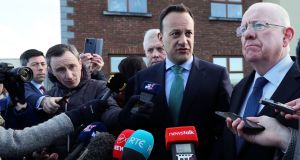 Mr Varadkar travelled to Drogheda to meet senior gardaí in the town investigating the feud between two criminal gangs and to receive an update on the investigation.

Speaking in Birr yesterday afternoon, he said: “I met with the gardaí alongside Mr Flanagan for over an hour today. Initially they gave us a confidential briefing on the situation and the actions they’re taking to bring the perpetrators to justice. Because it was confidential I think you’ll understand why I can’t divulge the details.

“And then we had a discussion on Garda resources in order to offer them any additional assistance that they needed, and in particular the kind of thing we talked about was getting the CCTV in the town working again and also making sure that they’re supplemented with additional resources from other parts of the country.”

Stronger laws would be introduced so the “belief” of a Garda chief superintendent that an individual was involved in gangland crime could be used as evidence in criminal trials, the party’s justice spokesman Jim O’Callaghan said.

Mr Flanagan said that “at no stage has any issue being raised of a type that Fianna Fáil are now raising”.

“This is ill thought out. I will examine the matter if it’s workable. And if it’s constitutional, we can have a look at it.”

Of the Fianna Fáil contention that Fine Gael has not taken crime seriously, Mr Varadkar said “they wouldn’t they, but let’s not forget that they are the party that stopped garda recruitment and really denuded gardai all over the country of resources.”