New members from England, Poland, the US and Slovenia graduate from Templemore training 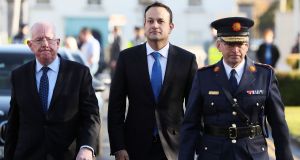 Taoiseach Leo Varadkar has asked the Garda Commissioner Drew Harris to improve the representation of ethnic minorities in the force.

The Taoiseach was speaking at the graduation of 197 new gardaí at Templemore on Friday which included 14 members from outside the State.

Female members accounted for 34 per cent of the new gardaí. This brings the total proportion of female gardaí on the force to 28 per cent, up from 18 percent since 2006. Female representation is now above the European average.

“Our role models should reflect who we are as a society, and the same is true of our gardaí,” the Taoiseach told new members at the Garda Training College. “Today I am asking Commissioner Harris to set an objective for encouraging people from ethnic minorities into the gardaí.”

The Garda has made some moves in recent years to attract more recruits from minorities, including specific recruitment campaigns and the relaxation of the garda uniform rules to allow the wearing of certain religious headgear.

About one per cent of gardaí are from non-Irish or ethnic minority backgrounds. On Friday members from countries including England, Poland, the US and Slovenia graduated from training.

The graduates were also addressed by Minister for Justice Charlie Flanagan who highlighted what he said was the need to develop and improve legislation around hate speech and hate crime.

“The time is right to review our laws and reassess what is necessary and effective to stamp out hate speech and hate crime in Ireland.”

Currently incitement to hatred is a crime but it is rarely prosecuted. There is no specific offence of “hate crime” but racism and bigotry can be taken into account by a sentencing judge in criminal cases when it is the motivation for another crime.

However, the Taoiseach said “the existing legal provision for hate as an aggravating factor in sentencing is not broadly understood in the public”.

A public consultation on the reform of hate speech and hate crime laws is currently underway. Mr Varadkar said the Government has also almost completed research of the effectiveness of other countries’ approaches.

“Building on this research, we will in the new year bring forward proposals for discussion on new hate crime legislation.”

Eighty nine of the 197 new gardaí who passed out on Friday will go to Dublin. Six will go to Coolock which has seen considerable gangland violence in recent months including the gun murder of a young man last weekend.

Thirty two gardaí are going to Cork but after a month all but 14 of these will be reassigned to other stations in Waterford, Wexford and Wicklow.

Another 32 are going to Limerick for their initial month long deployment. However only four will remain in the county come January.

Donegal, Sligo/Leitrim and Cavan/Monghan Divisions will get a total of 44 gardaí, all of whom will remain in those areas after their initial deployments.

Welcoming the new gardaí, Mr Harris said is essential for the force to take on the issues blighting communities including street level drug dealing.

“This is not just a criminal act, but a quality of life issue for communities, particularly when it takes place in public.

“Not only that, but it provides profits for major drugs gangs and enslaves people to drug addiction, which in turn can lead them to a life of crime to feed their habit and even death,” Mr Harris said.

Gardaí need to break this cycle “and do it early,” the Commissioner said. He promised they would do this through tackling drug traffickers and dealers as well as by concentrating on community policing.

The latest graduations bring the total garda numbers to over 14,300. Mr Varadkar said the Garda is on course to reach 15,000 sworn members by the end of 2021.