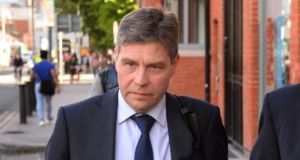 A van gardaí believe may have been used by the gang who abducted, beat and tortured businessman Kevin Lunney has been found.

Gardaí previously released a public appeal with a description of the vehicle and sought the public’s assistance in tracing it.

It has now been recovered in the Duleek area of Co Meath and is due to be forensically examined.

The Irish Times has learned while gardaí believe the van was used by the gang, it is not clear if Mr Lunney was ever in it or if the vehicle was used for surveillance purposes by gang members.

Garda Headquarters, Phoenix Park, Dublin, said it would not be commenting on an ongoing investigation.

The discovery of the van is the second significant breakthrough in the inquiry as a horsebox Mr Lunney was tortured was also found.

Mr Lunney was kidnapped on Tuesday, September 17th, on a roadway in Co Fermanagh as he drove home from work. He was then subjected to a two-hour ordeal, during which he was viciously beaten by a group of masked and armed men.

His car was set on fire after he was pulled from it close to his home and he was attacked in a horsebox.

His injuries have been described as “life-changing” by gardaí, who said the father of six was beaten “within an inch of his life” before being dumped on a Co Cavan road some 35km from his home.

Mr Lunney and other senior executives of Quinn Industrial Holdings have been subjected to five years of intimidation and violence in Cavan and Fermanagh by criminal elements opposed to their controlling of the company formerly owned by businessman Seán Quinn.