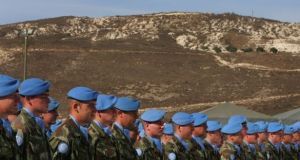 Hundreds of Irish soldiers banned by the United Nations from returning home from Lebanon during the coronavirus crisis are to be reunited with their families next month, it has been confirmed.

The UN has granted a special exemption to the 115th Irish Battalion, currently on a peace-keeping mission in the region, so that troops can travel back to Ireland in two groups, on June 21st and June 29th.

Around 360 members of the Defence Forces had been due to end their six-month Unifil mission in the Middle East earlier this month.

But the UN ordered a suspension of all military rotations on April 5th because of the Covid-19 outbreak.

Vice Admiral Mark Mellett, Chief of Staff of the Defence Forces, sought an exemption on the travel ban for Irish troops.

The UN initially indicated they could return home in late June and early July, but the dates have been brought forward, under strict conditions, including that the troops self-isolate on their return and their replacements are quarantined.

The 115th Battalion is mostly drawn from the 3rd Infantry Battalion, stationed at Stephens Barracks in Kilkenny. Members are mostly from the south east, including Kilkenny, Carlow, Kildare, Wexford and Waterford.

Under the conditions of the rotation, a 116th Batallion – which will replace the 115th in the overseas mission – will be quarantined at a Defence Forces training camp before being deployed to Lebanon.

Minister with Responsibility for Defence Paul Kehoe said he hopes the newly confirmed dates for the rotations will “ease the impact of the delayed reunion with families”.

“The minister acknowledges the assistance and understanding of the UN in granting the exemption during this very complex time,” a spokesman for the minister said.