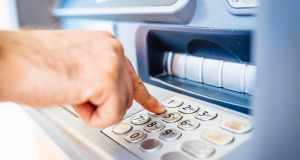 Two men have been arrested and 66 fraudulent credit cards have been seized by gardaí investigating the cloning and skimming of bank and credit cards.

Two men have been arrested and 66 fraudulent credit cards have been seized by gardaí investigating the cloning and skimming of bank and credit cards.

People involved in skimming cards use equipment that slots into the part of an ATM into which cards are inserted. When a customer’s inserts a card their data is skimmed by the equipment and the user’s pin number recorded by a concealed mini camera. The skimmed data is then cloned onto blank cards and paired up with the correct pin before being used to withdraw money.

Officers connected to the street crime unit operating out of Pearse Street station in Dublin carried out an operation targeting people suspected in being involved in the practice on Thursday.

The arrests followed the force receiving information from colleagues in the UK that a group involved in the practice was operating in the State.

“Gardaí from Pearse Street identified two males on Bedford Lane, Dublin 2, who they believed to be involved in this activity,” a Garda spokesman said. “One of these males attempted to conceal a wallet which contained seven bank cards, which have been identified as cloned fraudulent cards.”

A search of the second male’s wallet led to the discovery of five fraudulent cards. Both men, who are aged in their 30s, were arrested. One of the men was brought before a court on Friday in connection with the matter and was remanded in custody. The second man was due to go before a judge on Saturday.

The Garda spokesman said a BMW SUV was searched as part of a follow-up operation and 13 fraudulent cards were seized along with “expensive designer clothing and a number of receipts for other expensive goods believed to have been purchased using cloned credit cards in the Dublin City area”.

Subsequent searches were carried out in properties at Tyrellstown, the Navan Road area and Prussia Street and a further 41 fraudulent bank cards were discovered along with devices, a quantity of cocaine, a weighing scales and around €2,000 in cash.

“This investigation will continue with assistance from our specialist Garda national units together with Europol and other European Police forces,” the spokesman said.