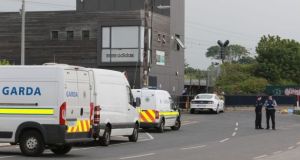 The scene of the shootings at the boxing club in Bray, Co Wicklow in June 2018. Photograph: Nick Bradshaw

Detectives believe the gun attack at Bray boxing club early on the morning of June 5th was badly planned and was not carried out by an experienced gunman.

Two people were still being held by the Garda on Sunday; a man in his 30s and a woman known to him in her 20s.

They are both from Dublin’s north inner city and were being detained under Section 50 of the Criminal Justice Act.

They can be held for up to seven days without charge and their detention follows significant progress in the inquiry, which gardaí believe is now near an end.

The man being held was detained in Donegal last Thursday. He was taken to Bray Garda station where he has remained since then.

The woman was arrested in Dublin on Saturday evening and was taken to Dundrum Garda station for questioning.

The killer drove himself to and from the scene on the day in question, parking his van outside while he went into the club on Bray Harbour and opened fire.

He then drove off in his Volkswagen Caddy and abandoned it on Pigeon House Road in south Dublin. He parked the van and took a bicycle from the back of the vehicle and then cycled away.

No effort was made to burn out the van; a common practice by gangs aimed at destroying any forensic evidence.

Gardaí have gathered forensic evidence from the vehicle, which they believe is from the killer. And they have also combed CCTV footage and found what they believe to be images of the suspect as he was cycling.

Gardaí believe the CCTV images and the forensic evidence identify the suspect and tie him to the murder.

They are very hopeful of securing a murder charge following the shooting down of Bobby Messett on Tuesday, June 5th.

Mr Messett, a 50-year-old family man who happened to be in the club for an early morning training session, was shot in the head and died from his wounds.

Mr Taylor (57), the father of 2012 Olympic boxing champion Katie Taylor, was shot in the upper body, suffering a wound to his arm. He survived the attack and continues to recover.

Ian Britton (35), Greystones, Co Wicklow, was shot in the leg but survived. Like Mr Messett, Mr Britton had gone to the gym for a morning workout class and was wounded during a botched attempt to shoot Mr Taylor.

Gardaí still believe that Mr Taylor, who is the driving force behind the club and leases the premises, was the intended target.

After the attack they issued Mr Taylor with a formal notification that his life was in danger, as they are legally obliged to do for any person against whom a serious threat is detected.

Mr Taylor left the Republic for a short period after the attack. But he has insisted he was not the target.

Gardaí believe the shooting is linked to a grudge a criminal faction had against Mr Taylor, though he has no involvement in any form of crime.