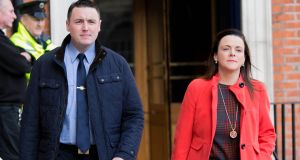 Gardaí were satisfied there was a substantial risk of death to the partner of a Garda whistleblower when they referred the matter to the force’s watchdog, the Charleton tribunal has heard.

Supt Eugene McGovern said a complaint made by Marisa Simms, the partner of Garda Keith Harrison, was sent on to the Garda Síochána Ombudsman Commission (Gsoc) under section 102 of the Garda Síochána Act. This allows for a referral where a Garda has caused death or serious harm to another person.

Garda Harrison said, before this, that relations with his Garda colleagues in Donegal became strained for a number of reasons, including the fact that he was in a relationship with Ms Simms, whose brother had been in an incident which led to the death of a local garda.

An anonymous letter was subsequently sent to the health services expressing concern over the wellbeing of Ms Simms’ children and alleging domestic rows involving her and Garda Harrison. Ms Simms was later brought to a Garda station and questioned about their relationship before making a statement.

Mark Harty SC, for Garda Harrison, said distress was not covered by the definition of serious harm under which the case was referred to Gsoc and he asked Supt McGovern if Donegal gardaí would bring charges of assault causing serious harm where no physical injury occurred.

Supt McGovern said a decision on what charges to bring would be a question for the DPP and he could not decide on hypothetical cases. He said that gardaí­ were happy that there was a “substantial risk of death to Ms Simms”.

Mr Harty said nobody had given crime prevention advice to Ms Simms, and that if an officer of the calibre of the witness believed there was a serious threat, he would have done something about it.

“We did. The matter was referred to the Garda Ombudsman,” Supt McGovern said.

Mr Harty said the ombudsman had no powers of arrest or crime prevention powers.

The tribunal is looking into whether Garda whistleblower Sgt Maurice McCabe was the target of a smear campaign on the direction of senior Garda management. The Garda Harrison allegation is that there were inappropriate contacts between Tusla and the Garda in relation to matters to do with Garda Harrison and Ms Simms. He has said these mirrored in some regards what allegedly happened to Sgt McCabe.

Meanwhile, three senior gardaí who were asked to clarify what they knew about a meeting that took place days after Ms Simms made a statement of complaint about him, have provided documents to the tribunal.

A fourth man, retired assistant commissioner Kieran Kenny, was unable to provide a statement at this time as he was “on the far side of the world”, Diarmaid McGuinness SC said.

Tribunal chairman Mr Justice Peter Charleton sought clarification from the four gardaí after hearing about handwritten notes taken by Chief Supt McGinn at a meeting in Letterkenny Garda station on October 8th, 2013, two days after Ms Simms made her statement. He wanted to know what knowledge each of the officers had about the meeting.

Mr McGuinness said Chief Supt McGinn’s handwritten notes were handed in to Garda headquarters several months ago, but had not been forwarded to the tribunal. The note did not refer to Tusla or HSE and was not sent on as it appeared staff in Garda headquarters did not believe it was relevant.

Mícheál P O’Higgins SC, counsel for the Garda Commissioner, said he regretted the error and that there was “no question of concealment or anything like that”.