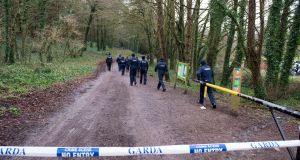 Gardaí investigating the disappearance of Cork woman Tina Satchwell have appealed to anyone who may have witnessed any activity in a woodland near her home at the time of her disappearance to contact them.

Supt Colm Noonan, of Midleton Garda station, who is heading up the investigation into Ms Satchwell’s disappearance, said that gardaí were anxious to hear from anyone who may have witnessed any unusual activity at Mitchell’s Wood in Castlemartyr in March 2017.

Supt  Noonan appealed for anyone with any information to contact a special incident room at Midleton Garda station.

He made the appeal during a special media briefing on Monday as the North Cork Garda Divisional Search Team began an extensive search of about 40 acres of woodland in Castlemartyr.

Gardaí cordoned off the area at Mitchell’s Wood on Friday but were forced to postpone a planned search because of Storm Emma.

The search operation involves a team of about 16 Garda searchers, a specially trained search dog brought in from the UK, and searchers drawn from the First Southern Brigade at Collins Barracks in Cork.

Supt Noonan confirmed that the search is scheduled to last two to three weeks, but declined to answer questions on whether gardaí were searching for a body.

However, The Irish Times has learned that the search will involve personnel trained in the use of equipment which can detect where soil has been disturbed or broken.

Supt Noonan refused to be drawn on what information gardaí had received that had prompted them to mount such an extensive search, but it is understood they were contacted about a month ago by a witness described as “a credible source”.

It is also  understood the source reported that he had seen some suspicious activity in the woodland early one morning about the time that Ms Satchwell disappeared, but he only realised the significance of what he saw following a recent media appeal for information.

Ms Satchwell (45) has been missing from her home on Grattan Street in Youghal since March 20th, 2017, when her husband, Richard, returned from a shopping trip to Dungarvan, Co Waterford, and found she was not in the house. He reported her missing to gardaí four days later on March 24th.

Mr Satchwell, who met his wife in the UK when she moved there 26 years ago, said he waited a few days before reporting his wife’s disappearance as he thought she may have needed to “get her head straight” after what he said were several months of anxiety.

Supt Noonan said on Monday that a team of detectives investigating Ms Satchwell’s disappearance have to date conducted more than 220 separate lines of inquiry, including with Interpol, as they try to establish what happened to her.

“As a result of these inquiries and following detailed planning, a search has commenced today at woodland at Mitchell’s Wood, Bridgetstown, Castlemartyr, Co Cork, for evidence relating to Tina’s disappearance,” he said.

Supt  Noonan said that Mr Satchwell and Ms Satchwell’s relatives have been informed of the search operation by Garda liaison officers. “You will appreciate that this is a very stressful time for them and I would urge that they be afforded privacy at this time,” he said.

Mr Satchwell told TV3 on Monday that he was shocked when he learned gardaí were searching the woods in Castlemartyr, but he still hoped that his wife would be found alive, safe and well.