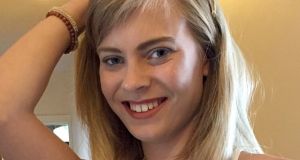 Ana Kriégel was 14 years old when she was murdered in 2018. Photograph: via RTÉ News

Six men and four women have been accused of sharing on social media the names and pictures of the two boys convicted of the murder of Ana Kriégel.

The 10 defendants, aged between 22 and 48, had their cases listed before Judge Brian O’Shea at Dublin District Court on Wednesday.

Judge O’Shea adjourned all the cases until December 2nd. They will then be expected to indicate how they will plead.

The schoolgirl was aged 14 when she was murdered at Glenwood House, Laraghcon, Clonee Road, Lucan, Co Dublin, on May 14th, 2018. Her body was found in the disused farmhouse on May 17th, three days after she was reported missing.

They were 13 at the time of the murder and as juveniles, had the legal right to anonymity. After their trial, images appeared on social media purporting to identify them.

At the teenagers’ first appearances at the Children’s Court in Dublin, Judge John O’Connor reminded the news media and social media users they would face prosecution if they identified the pair. That order continued and was reiterated by Mr Justice Paul McDermott throughout their trial at the Central Criminal Court last year.

Dublin District Court on Wednesday heard that in the days after the boys were convicted, from June 18th to 20th, 2018, a number of posts online breached the court orders.

Judge Brian O’Shea was given an outline of the allegations.

Robert Murphy (30), of Dolphin Road, Drimnagh, Dublin, was not present and had his case adjourned in his absence. Garda Ciaran McGowan told the court there was a screenshot from Twitter in which it was alleged Mr Murphy was involved in a thread discussion. It was alleged Boy A was named.

Garda Niall Carolan told the court it was alleged Jake Marshall (22), Balcurris Gardens, Ballymun, posted that everyone “deserves to see” the two boys who were convicted.

Mother-of-three Louise Heaney (48), of Killinarden Estate, Tallaght, is accused of sharing a picture of the two boys, on Facebook, with their faces marked to identify them, said Garda Eamonn O’Neill.

Hazel Fitzpatrick, a 24-year-old mother-of-two, with an address at Easton Green, Leixlip, Co Kildare, posted text and pictures on Facebook saying “these are the two people who were involved and everyone should see their photograph,” Garda O’Neill told the court.

Leeanda Farrelly (26), of Kilmartin Avenue, Tallaght, allegedly posted a photo of one of the killers on Facebook, Garda Robert McNicholas said.

Edel Doherty (47), of Rory O’Connor House, on Hardwicke Street, Dublin1 posted photos of Boy A and Boy B on Facebook, Garda McNicholas told the court.

Jamie Shannon (25), of Empress Place, Dublin 1, was not present because he had a hospital appointment. Judge O’Shea was told it was alleged he posted pictures of both of the boys on Twitter.

Kyle Rooney (25), of Rathfield Park, Raheny, allegedly posted photos of the two boys on Twitter, the court was told. His case was also dealt with in his absence.

Last week, 25-year-old Rebecca Ryan, from Ballybeg, Co Waterford, was the first person before a court accused of sharing pictures of the boys on Twitter. She is due back in court in December.