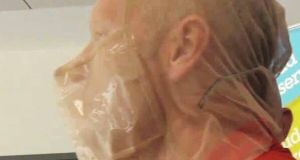 Spit hoods, or anti-spit guards as they are called by the Garda, are wire and fabric devices which are forcibly placed over the heads of suspects to stop them purposely spitting or coughing on gardaí. File photograph: PA

At least 14 per cent of spit-hood deployments by gardaí since the start of the Covid-19 pandemic have involved people with obvious mental illnesses.

And a spit hood was used on at least one person with an obvious learning disability and on five children, including one who was 14 years old.

Spit hoods, or anti-spit guards as they are called by the Garda, are wire and fabric devices which are forcibly placed over the heads of suspects to stop them purposely spitting or coughing on gardaí.

Their use has been criticised by various human rights bodies and the Policing Authority which has said they should be discontinued as soon as possible.

According to data released to The Irish Times, the Policing Authority has received detailed reports concerning 99 incidents of spit-hood use. This is out of the 104 recorded incidents of their use since March when they were introduced.

Shortly after their introduction, the Policing Authority started asking gardaí to record spit-hood use under a number of headings including if suspects had learning disabilities, were intoxicated or if they were mentally ill.

In 14 incidents “the Garda member perceived the detainee to have obvious signs of a mental health issue”, the Policing Authority said. In reality, this figure is likely to be significantly higher as in 30 incidents the mental condition of the suspects was not specified by the reporting garda. In 51 incidents the suspect did not have a discernible mental illness.

In one incident, gardaí used a spit hood on a suspect with “obvious signs of a learning disability”. Again, this figure may be significantly higher as in 31 incidents gardaí did not provide enough detail.

In the majority of incidents (64 of the 99), the garda perceived the suspect as displaying obvious signs of intoxication.

Some detainees displayed more than one of these conditions, the Policing Authority said.

It has previously been reported that spit hoods have been used on five people under the age of 18. In one of these incidents the suspect was 14, a source told The Irish Times.

In the vast majority of cases, spit hoods were used for less than 20 minutes. However, in one case a hood was left on a suspect for five hours.

The Garda is reviewing the continued use of spit hoods with a report expected at the end of the month.

The Policing Authority has said it wants them to be discontinued. It noted the Garda uses the same types of hoods as the PSNI which, according to Amnesty International, are “not an effective means to prevent Covid-19”.

There have been 192 spitting or coughing attacks on gardaí since March.

The authority said there “are many human rights concerns” about spit hoods. “Furthermore, the use of anti-spit hoods on vulnerable individuals is an ongoing source of concern,” it said in its most recent report.

Executive director of the Irish Council for Civil Liberties Liam Herrick said on Monday the new figures were “extremely troubling”.

“In other parts of the world spit hoods have caused suffocation and deaths. The risks are significantly heightened in circumstances where they are used against a person who is in crisis, or is intoxicated, or doesn’t fully comprehend the situation they find themselves in.”

The Garda Representative Association (GRA), which represents rank and file gardaí, has called for the hoods to be retained.

“The incidents of gardaí being spat at is almost double the number of deployments of anti-spit guards,” GRA president Jim Mulligan said.

“Gardaí have rights as workers and are entitled to equipment that protects them in their work.”