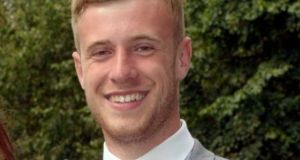 Cameron Blair (20) died after being wounded in the neck by a knife outside a house party in Cork on January 16th. Photograph: Denis Boyle

Gardaí investigating the murder of 20-year-old student Cameron Blair in Cork city were on Thursday night continuing to question a teenager about the killing.

Detectives arrested the 17-year-old, from Togher in Cork city, when he presented himself at Togher Garda station for questioning about the murder of the Cork Institute of Technology (CIT) student at a house party on the Bandon Road in Cork on January 16th.

Mr Blair was trying to calm the situation after a number of teenagers gatecrashed the house party and were asked to leave, only for three of them to try to gain re-entry to the house, which is next to Bandon Road Post Office.

A row is understood to have broken out between those hosting the party and the teenagers trying to regain entry to the house when Mr Blair was fatally wounded in the neck with a knife.

Mr Blair staggered from the door of the house onto Bandon Road before collapsing. He was treated there by paramedics before being rushed by ambulance to Cork University Hospital, where he died later.

Gardaí launched a murder investigation, examining over 200 hours of CCTV footage from the Bandon Road area and taking statements from more than 70 people, including about 50 students who attended the house party.

Gardaí also spoke to a number of teenagers involved in gatecrashing the party and obtained clothing and footwear from them, which they sent to the Forensic Science Ireland laboratory for analysis.

It is understood gardaí also recovered a knife during a search of a green area of nearby Connaught Avenue, which they believe was used in the fatal assault. The knife has also been sent to Forensic Science Ireland.

Gardaí have also studied video footage taken on phones by those at the party and cross-referenced it with CCTV footage from commercial premises on the Bandon Road to try to identify suspects in the case.

On Thursday, one of those who gatecrashed the party presented himself at Togher Garda station at 1pm, accompanied by a family member and his solicitor, where he was formally arrested by investigating gardaí.

Detectives arrested the teenager under Section 4 of the Criminal Justice Act which allows gardaí to detain suspects for up to a total of 24 hours. Gardaí were on Thursday night continuing to question the teenager about the killing.

A second-year chemical engineering student at CIT, Mr Blair’s remains will lie in repose at his family home at Ballinascarthy in West Cork, where he lived with his parents, Noel and Kathy, and younger brother Alan (17).

The funeral service will take place at 2pm on Sunday at St Peter’s Church in Bandon at 2pm, where Mr Blair’s teammates from Bandon Rugby Club and Bandon Athletic Club will form a guard of honour before burial takes place in Kilbeg Cemetery.