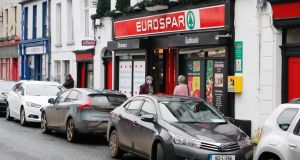 Rathkeale in Co Limerick. Gardaí said last week that they had enough resources to deal with between 1,000 and 2,000 visitors to the town over Christmas. Photograph Liam Burke/Press 22

A Limerick TD has called for the Defence Forces to assist gardaí to police the town of Rathkeale over future Christmas and new year periods, following a number of alleged incidents in the town over the recent festive season.

The call, made by Independent TD Richard O’Donoghue, came as gardaí began an investigation into a bare-knuckle fight which is alleged to have occurred in the town last Monday.

Videos showing a fight in the town centre were shared online on Wednesday.

The videos show a group of men and women jeering and shouting at one another, as two bare-chested males fight one another.

Gardaí said last week that they had enough resources to deal with between 1,000 and 2,000 visitors to the town over Christmas.

“Bring in the Army to help, yes the Army aren’t able to make arrests, but they can be there as a presence,” Mr O’Donoghue said.

“The Army could help with Garda checkpoints, they could be on the street to see this for themselves, gather information for the gardaí, find out where the antisocial behaviour is . . . We have fights on the streets in the middle of the day.”

Deputy O’Donoghue said he was not referring to local families, “that have been there for generations, that have integrated in the community, and have supported businesses in the community”.

“I am talking about a minority of people that come and cause it . . . These people are not from Rathkeale, or Ireland, and they come in and try to use Rathkeale as an antisocial party town, which it is not, and we need to stop that.”

Rathkeale Community Council said the town had one of the lowest crime rates in the Newcastlewest Garda district and it has been unfairly targeted.

A garda spokesman said: “Gardaí responded to reports of an assault in Rathkeale town square on Monday, January 4th. One male, aged in his forties, was conveyed to Limerick hospital for treatment for his injuries and has since been released and returned home.” He added: “One male has been arrested and charged and is due to appear before Newcastlewest District Court on January 8th.”