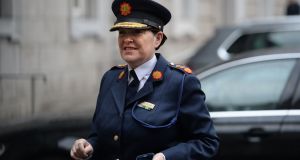 It is expected Garda Commissioner Nóirín O’Sullivan will be called to appear before the Oireachtas Justice and Equality Committee on Wednesday. File photograph: Dara Mac Dónaill / The Irish Times

Tánaiste Frances Fitzgerald did not ask Garda Commissioner Noirin O’Sullivan to resign on Monday after the met to discuss the recent garda scandals.

There had been an increasing number of calls for her to stand aside after revelations that 14,700 people were wrongly convicted of motoring offences and breathalyser tests were exaggerated by one million.

Minister for Education Richard Bruton said the Government is not happy about the revelations and insisted a proper explanation was required from the Garda Commissioner.

However he insisted Ms O’Sullivan retains his full confidence.

Minister for Social Protection Leo Varadkar has urged opposition parties not to table a motion of no confidence in the Ms O’Sullivan, saying she is part of the solution, not part of the problem.

The Minister for Social Protection said the Commissioner had put solutions in place to deal with the controversies.

Mr Varadkar said: “I would hope and expect that opposition parties would not try to play politics with this very important issue.

“There are other mechanisms suggested, for example it has been suggested she may appear before the Oireachtas committee on justice to give further explanations and to inform us what happens next.

Earlier today Sinn Féin deputy leader Mary Lou McDonald said the party will publish a motion of no confidence in the Commissioner.

The situation is now “farcical” as the force “lurches from one crisis to another,” Ms McDonald said.

Commissioner O’Sullivan is expected to give a comprehensive statement within the next 48 hours giving a detailed explanation of how the latest scandals affecting the force arose.

The issue will dominate the Cabinet meeting on Tuesday.

It is expected Ms O’Sullivan will be called to appear before the Oireachtas Justice and Equality Committee on Wednesday to face questions on the matter.

Minister for Justice Frances Fitzgerald has expressed confidence in Ms O’Sullivan since the unprecedented revelations last week that a million breath tests recorded by Garda members across the country had never taken place.

The Garda admitted just more than one million breath tests were carried out between 2012 and 2016, whereas it had previously claimed two million tests were conducted.

An audit into the discrepancies in the figures began in August 2015, some 13 months after the Medical Bureau of Road Safety first flagged the inflated figures.

The existence of the audit was not disclosed to the Policing Authority, with members learning it was under way via a report in The Irish Times.

“This is just an absolute mess and there is a clear absence of leadership, that’s not good enough. We need confidence and proper leadership,” Ms McDonald told RTÉ’s Morning Ireland.

“It is like Groundhog Day. It is past unacceptable at this stage.”

Ms McDonald said questions over the wrongful conviction of almost 15,000 motorists and the over reporting of drink driving tests required detailed answers and an assurance it would not happen again.

“Serving gardaí have been battered and bruised by wave after wave of controversy,” she said.

“It is now eminently clear that the current Commissioner cannot lead.”

Ms McDonald also said there was a question mark over the competency of the Minister for Justice.

Road Safety Authority chief executive Moyagh Murdock said the revelation were a “body blow” to the authority and the families of road traffic accident victims.

Ms Murdock said she was “quite staggered” when the details were revealed last week.

“We depend on the credibility and transparency of law enforcement. We need to get behind any efforts to find out what happened.”

“We were aware there was an audit ongoing and we had our own concerns. The MBRS (Medical Bureau of Road Safety) had also raised concerns about the anomaly on the numbers of kits they were giving out, receiving back and analysing,” she said.

“I don’t know how a figure of one million came about. Every district has to submit figures on a regular basis.”

Ms Murdock said further information from the Commissioner was needed on what would happen next.

“We want the Commissioner to immediately commit to implementing promises of greater traffic enforcement,” she said.

Ms Murdock called for an increased role for the MBRS but declined to comment if she had faith in the Commissioner.