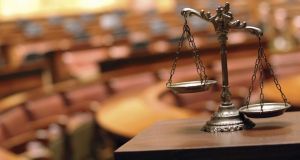 A teenager who stole wreaths belonging to Sinn Féin in “revenge” for a suspected attack on a loyalist memorial site has received a four-month suspended jail sentence.

A teenager who stole wreaths belonging to Sinn Féin in “revenge” for a suspected attack on a loyalist memorial site has received a four-month suspended jail sentence.

Macauley McKinney (19) was told he could have started a riot over his part in a suspected group raid carried out in west Belfast.

District Judge Barney McElholm said: “How many more hundreds of years is this going to go on? This is absolutely scandalous.”

McKinney, of Roslyn Street in Belfast, pleaded guilty to the theft carried out in the early hours of March 7th.

Belfast Magistrates’ Court heard he was arrested after police stopped a car near the scene of the crime on Hugo Street. Two other men and a 17-year-old youth were said to be in the vehicle with him. They are facing the same charge of stealing two wreaths of unknown value belonging to Sinn Féin.

Police said parts of a republican-type garland, with green, white and orange ribbons tied to it, were found in the car. An Ulster Flag was also recovered. The wreaths had been provided for a commemoration event at murals on Hugo Street.

McKinney was said to have told officers: “You should see what they done to our cenotaph.” There is no suggestion that any Sinn Féin representatives had targeted a loyalist memorial site.

Defence counsel Mark Farrell accepted his client’s behaviour could have triggered a riot.

“This was an utterly tribal, sectarian act.”

Mr Farrell told the court McKinney made an “off the cuff” remark to police to explain his actions. “He had gone to the republican commemoration to steal items in revenge for (what happened) at the loyalist commemoration,” the barrister said.

Stressing McKinney’s relative youth and naivety, he added: “This is a young man born in 1996, two years after the first ceasefires and two years before the Good Friday Agreement.”

Judge McElholm imposed a four-month prison term for the offence, suspended for three years, and a £250 fine.

He insisted: “This sort of behaviour is absolutely disgraceful, there’s no need for it whatsoever and it just leads to more tit-for-tat nonsense.”

1 Coronavirus: HSE experts support the early reopening of schools
2 Quarantine may be lifted for arrivals into Ireland from countries with low Covid-19 cases
3 All students will not return to school even if social distancing relaxed – McHugh
4 The momentum behind calls to ease lockdown may become irresistible for politicians
5 Irish planning for no-deal Brexit to restart as EU-UK talks go badly
Real news has value SUBSCRIBE