Suspect threatens gardaí and their families in new video

The Association of Garda Sergeants and Inspectors (AGSI) has released a video shot from inside a patrol car showing a suspect threatening gardaí and making threats against their family members. The video was published at AGSI’s annual conference in Westport, Co Mayo, as members of the association called for body-worn cameras to be issued to all Garda members. Video: AGSI 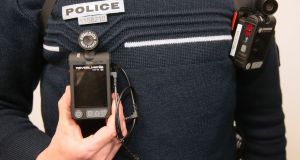 The Association of Garda Sergeants and Inspectors (AGSI) has published a video shot from inside a patrol car showing a suspect threatening gardaí and making threats against their family members.

The suspect, who is not identifiable but whose voice can be heard, is being transported to a Garda station along with his father in the clip.

He subjects the arresting gardaí in the car to a tirade of verbal abuse and then threatens to find their wives and children and rape them.

The video has been published at AGSI’s annual conference in Westport, Co Mayo, as members of the association called for body-worn cameras to be issued to all Garda members.

Delegates at the conference, who passed a motion calling on Garda headquarters to issue the cameras to all Garda staff, heard from officers who said the cameras would protect them from false allegations.

They also said the cameras would fully capture the abuse gardaí were subjected to at protests, including at anti-water charges demonstrations.

He told delegates that some anti water-charges protesters had absorbed significant Garda resources in the last 12 to 18 months.

“Daily intervention is still required at the site of water [meter] installations, usually because of the same cohort of protests,” he said.

He said that when he made an application to be provided with a camera to record such policing operations, none could be supplied to him.

“Body cameras are invaluable in the capturing of evidence at crime scenes,” he told delegates.

“And studies in the US have also shown a clear reduction in complaints against police officers [as a result of cameras].

“The behaviour of individuals in mental health crisis and public order situations are some examples where body cameras have significantly reduced assaults on police officers. They also hold people accountable for their actions.”

Sgt Ernie White, who was speaking at the conference on behalf of the AGSI national executive, said the leadership of the association supported the introduction of body-worn cameras.

“Every year there are numerous false complaints made against our members,” he told delegates.

“They’re investigated by the Garda Ombudsman and I believe these cameras will show what is really happening on the streets.”

He said recorded footage would show judges “what our members had to put up with”.