Stormont to decide if gay men can give blood in North 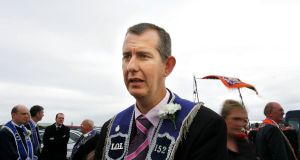 Former Northern Ireland health minister Edwin Poots has succeeded in an attempt to overturn rulings that his ban on gay men giving blood was irrational and infected by apparent bias. Photograph: The Irish Times.

Former Northern Ireland health minister Edwin Poots has succeeded in an attempt to overturn rulings that his ban on gay men giving blood was irrational and infected by apparent bias.

Appeal judges also held there was no basis for concluding that the decision was predetermined by his Christian beliefs. They further ruled that it was for Stormont’s health minister, rather than the UK health secretary, to decide whether homosexual men should be permitted to donate.

By a further, 2-1 majority, the Court of Appeal concluded the current maintenance of the lifetime prohibition was not disproportionate or contrary to EU law. The verdict represents a vindication of Mr Poots position in a four-year legal battle over donations from men who have sex with men.

The gay blood ban, put in place during the 1980s Aids threat, was lifted in England, Scotland and Wales in November 2011.

It was replaced by new rules which allow blood from men whose last sexual contact with another man was more than a year ago.

Mr Poots maintained the prohibition in Northern Ireland on the basis of ensuring public safety. Findings were made against him in a judicial review sought by a homosexual man granted anonymity in the case and referred to as JR65.

A High Court judge held that the Democratic Unionist MLA did not have the power to keep the lifetime ban. Challenges to the verdict have been continued by Mr Poots’ DUP ministerial successors and the British health secretary Jeremy Hunt.