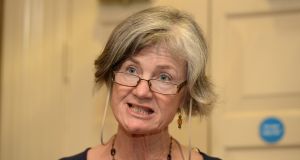 Margaret Martin, director of Women’s Aid. “As leading experts on domestic violence and homicide in Ireland we have not been aware and have not been consulted in this latest development.” Photograph: Dara Mac Dónaill

Murders that take place in a domestic setting are to be reviewed individually by specialist gardaí in an effort to identify how they might have been prevented.

Women’s groups have long been calling for such domestic homicide reviews (DHRs) to be introduced in Ireland following their inclusion in many other jurisdictions.

One of the main campaigners for the introduction of the reviews, Women’s Aid, reacted with surprise at the move by An Garda Síochána.

“As leading experts on domestic violence and homicide in Ireland we have not been aware and have not been consulted in this latest development. So, this is unexpected news,” Women’s Aid director Margaret Martin said.

Under the new system, specialist gardaí from the National Protective Services Bureau will examine domestic homicides, particularly the events that led up to the death. This will be a separate process to the criminal investigation.

Any abusive history that led up to the killing will be examined. Officers will also examine any interactions between the family members and gardaí before the death to establish if anything could have been done differently, a Garda spokesman said.

“It’s to look back and see if we can try and improve the service delivery; if better procedures and practices can be identified to protect future victims.”

A specific unit in the bureau is examining what policy and procedures should govern the reviews before they officially start.

The new system is to be welcomed, said Ms Martin, but “seems to fall short of what is recommended best practice from other jurisdictions”.

Women’s Aid had been calling for reviews to be put on a statutory basis and to have a multi-agency approach involving the HSE, Tusla and local authorities.

“These DHRs should have powers to make and monitor recommendations to improve overall response to intimate partner violence,” Ms Martin said.

She said what was proposed by gardaí “cannot substitute for a well-resourced, multi-agency, quality assured and ongoing statutory domestic homicide review process. We look forward to getting a more in-depth update on the details of the work planned by An Garda Síochána.”

Last year, two senior Garda analysts said there were severe problems with how gardaí were recording some instances of domestic killings. They said a 10-year review of domestic homicides showed significant deficits with how information was recorded on the Garda Pulse system.

These deficits left women at risk of future domestic violence, the analysts said. Laura Galligan and Lois West also alleged they were belittled after airing their concerns and came under “severe pressure” to withdraw the complaints.

According to research from Women’s Aid, half of all female murder victims are killed by a partner or ex-partner. Nine out of 10 are killed by a man they know and 61 per cent are killed in their own homes.