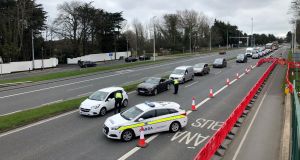 Gardai check motorists destinations and reasons for travelling at a Garda Checkpoint on the N11 Dublin in March. Photograph: Bryan O Brien / The Irish Times

Some young people viewed gardaí as being on a “power trip” during the lockdown and treating them differently to adults, the Policing Authority has said.

In its sixth and last dedicated report on the Garda response to the pandemic, the Policing Authority was broadly complimentary on how the organisation has handled the crisis to date.

In particular, it praised the Garda’s response to domestic violence and said that in several cases the Garda apparently averted possible domestic homicides by intervening in time. The Authority said there is a belief “that the policing response to domestic abuse is the best it has ever been in Ireland”.

However it raised concerns about Garda treatment of young people during the pandemic. It said young people viewed themselves as being treated differently to adults by police.

“Words like ‘power trip’ were used to describe some young people’s experience of policing during Covid-19.”

Young people reported feeling perceived as “inconvenient” and “reckless”. Such views were common irrespective of “social class, ethnicity, sexuality or location in the country,” the Authority said.

Organisations working with youths drew attention to the long term consequences of a break-down in trust between young people and the Garda.

The Authority said social media means young people can now compare their experiences “within a global context,” an apparent reference to the police brutality protests which have swept the US.

“The Garda Síochána enjoys significantly high levels of trust with the public but organisations cautioned against any assumption that this would naturally follow into the next generation,” it said.

Chairman Bob Collins called on the Garda to capitalise on the good-will and experience it has built up during the pandemic. The organisation must “capture that new approach, that new openness, that greater respect and understanding and to make it a permanent part of the life and work of all in the organisation.”

The Policing Authority repeated concerns it has about the Garda use of spit-hoods during the pandemic. It noted reports from other police forces, including the PSNI, that the hoods are not effective in preventing disease.

Spit-hoods have been used 86 times by garda since the start of the pandemic, including six times in the last month. Most uses lasted for less than twenty minutes but on one occasion a spit-hood was left on a suspect for five hours.

About 85 per cent of suspects were male and half were intoxicated.

There have also been 144 spitting or coughing attacks on gardaí during the crisis, including 22 in the last month.

According to the report, there have been 188 Covid-19 related complaints to the Garda Ombudsman to date, some of which have been deemed inadmissible. The majority of complaints relate to gardaí not wearing PPE.