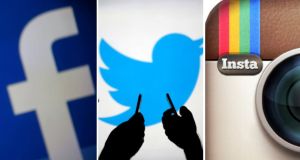 Social media operators Facebook, Twitter and Instgram have tried to block images of a teenage girl engaged in a sex act with a male at the Eminem concert at the weekend.

Social media companies Twitter, Facebook and Instgram have moved to try and block access to images of a teenage girl engaged in a sex act with a male at the Eminem concert in Slane last weekend.

Facebook last night confirmed it had removed at least one page that had published photographs of the girl last weekend because the images violated Facebook’s terms of service. The girl is 17.

As of 8am the images were still easily accessible online.

Gardai said last night they were “aware of the images and are enquiring into the matter”.

A spokesman said gardai had spoken with the girl involved. “We would ask the media to respect the privacy of the people involved and their families.”

Under the Child Trafficking and Pornography Act (1998) someone who “knowingly produces, distributes, prints or publishes any child pornography” is guilty of an offence and can face a fine of up to €1,905 or 12 months in jail.

“We have built a large and highly trained team of safety experts who review these reports and take action, including escalating serious cases to the police.”

The spokesperson said despite this there will unfortunately always be “a tiny number of malicious people who are intent on harming others, online and offline”.

“We believe that Facebook’s real name culture makes it a safer environment for all, and encourage young people and their parents to use our social reporting tools – which enable reports to be shared with a trusted friend or family member – and visit our Family Safety Centre at www.facebook.com/safety.”

A spokesperson for Twitter said it did not tolerate “child sexual exploitation”.

“When we are made aware of links to images of or content promoting child sexual exploitation they will be removed from the site without further notice and reported to The National Centre for Missing & Exploited Children (NCMEC).

The social media company appeared to have taken such action last night because a number of people were tweeting about accounts that were suspended for reposting the pictures in question.

A spokesperson for Twitter said: “We ask people not to tweet, retweet or repost child sexual exploitation for any reason. Please report it to us immediately by sending an email to cp@twitter.com so that we can remove it.”

While a spokesperson for Instagram could not be immediately contacted a number of users of the service said their accounts had been disabled for posting the images.