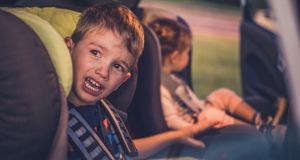 Gardaí have appealed for parents to put seat belts on their children after stopping a car in Sligo with five unsecured children.

Members of the Sligo Roads Policing Unit stopped the car when they spotted a toddler standing up behind the driver.

When the car was pulled over, gardaí saw it contained eight occupants – a driver, two adult passengers who were each holding a child and three other toddlers. All children were under the age of six and not wearing seat belts.

The driver was found to have been driving while disqualified and with no insurance. He was also displaying a false NCT disc and an expired road tax disc. He was arrested and will appear in court at a later date, say gardaí.

Gardaí seized the car and arranged for the transportation of the passengers.

“The driver of this car recklessly endangered the lives of his entire family. PLEASE PLEASE belt up and drive safely and always ensure children are adequately secured and safe,” said the Garda on social media.