Stella Nolan, sister of Sylvia Sheils, talks about woman who was murdered in 1997 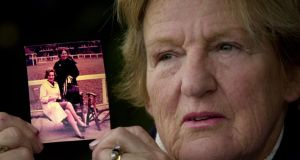 Stella Nolan holds a photograph of her and her sister murder victim Sylvia Shiels, taken in the early 1960s at the horse show in the RDS. Photograph: Bryan O’Brien/The Irish Times. 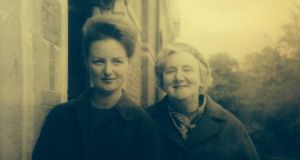 A family photograph of Sylvia Sheils (left) with her late mother Áine.

The contrast could not have been starker. Two brutal murder trials, running almost in parallel in the Central Criminal Court in Dublin, attracted very different degrees of public attention.

When Graham Dwyer was convicted of the 2012 knife murder of Elaine O’Hara on a Friday afternoon at the end of March, the courtroom was packed with gardaí, lawyers, family members, journalists and curious onlookers. Many members of the public had queued each morning for a seat, or even standing room, in the small courtroom for the Dwyer trial in courtroom 13.

There were reports of jostling and elbowing. On at least one occasion, security was called to deal with a crush of people vying for seating. Anecdotally, one female journalist was kicked in the shin by a member of the public attempting to get into the courtroom ahead of her.

In court number 17, two floors above in this panopticon of a building, Mark Nash (42) was on trial for two horrific murders of women in a mental health facility at Grangegorman in Dublin’s north inner city almost two decades ago in 1997.

On the second day of the jury’s deliberations last Friday, the courtroom was almost empty. There was no media crush, no fight for seating space. A few random members of the public sat at the rear of the room. The presence of Sylvia Sheils’s sister Stella Nolan went almost unnoticed. Stella’s daughter Suzanne sat with her and they spoke quietly to their solicitor Michael Finucane and to one or two journalists who sought them out.

Stella Nolan, one of four siblings, told The Irish Times of their childhood in a detached house in Killiney in south Dublin and later schooling in Kilkenny. There were three girls and a boy. Sylvia was “the youngest and most beautiful and most striking and the most talented”.

“She had the most beautiful blue eyes,” Stella said. “She was a great character and very lively and fun and beautiful.”

Ms Nolan recalled Sylvia’s somewhat “spicy life”, which was the subject of discussions between the siblings. Sylvia passed the civil service exam and came “first in Ireland”, Stella believes.

She went on to work in the Valuation Office for 20 years, although she struggled with mental health issues.

Their mother died in 1964 and Sylvia “seemed to go into a decline”, her sister recalled. “She seemed to have lost her marker.”

She lived on her own in a flat. “She managed to stay alive for a couple of years.”

Sylvia used to come to Ms Nolan’s home for Christmas, although she recalls now that the children didn’t really enjoy her presence and found it difficult.

Sylvia was probably in her 40s when she first went into Grangegorman and she managed to maintain her job and travel to her office every day from there.

“She was happy enough to be there and she was coming out of her decline.”

But ultimately, her sister says she thinks she “lost hope” and that she became “very anxious”.

Stella used to occasionally meet her for coffee at the Kylemore Café on O’Connell Street in Dublin.

Her last telephone conversation with her sister was just a couple of days before she died, when Stella said to Sylvia: “I’ve always looked after you like a mother, haven’t I?” She was glad to have had that conversation. “She was dead on the Friday,” Stella says.

Anyone who recalls the murders of Sylvia Sheils and Mary Callanan in their beds in that sheltered accommodation unit in the capital’s north inner city will remember the huge media attention it received at the time.

Stella Nolan recalled that when she heard the radio reports that morning of the murders of two women at the Orchard View address, she knew instinctively that one of the victims was her sister.

She rang her cousin, also Sylvia, who contacted the relevant authorities. It was confirmed that one of the murdered women was in fact Sylvia Sheils.

Lengthy reports by former State pathologist Prof John Harbison, read to the court during the trial, described both women’s injuries as “outside my experience in 26 years”.

Stella Nolan, now in her early 80s, drove herself to court as often as she could to be present during the trial, long delayed by complex legal issues.

Accompanied by her daughter Suzanne last Friday, on the second day of the jury’s deliberations, she told The Irish Times: “The victims of murder are the families and they get nothing. They get no help from anyone.”

She said she was furious to discover that her sister had no alarm and no buzzer available to her in Orchard View, even though it was sheltered housing.

“Families of murder victims get no support. A person who is convicted has broken the law. All that he is required to do is to go to prison. He has no worries, he doesn’t have to go to work and he has exercise and educational facilities.”

“Why should we allow this situation? Why do we not make them contribute to their upkeep?”

Ultimately, death is a “part of life”, Ms Nolan says. “But murder is not.”

Throughout the trial, she says, she just wanted to stand up in court and shout: “Who murdered my sister?”

At the back of the courtroom, Stella Nolan quietly pointed out to a journalist that her sister’s name had been spelt incorrectly. “It was Sheils, not Shields.”

Sylvia Sheils, still in her 60th year and not having achieved her 60th birthday, was born on November 29th, 1938. She was murdered alongside Mary Callanan at their home at Orchard View, Grangegorman, between March 6th and 7th 1997.