Witness would not make statement before consulting with party hierarchy, says lead investigator 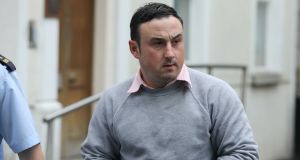 A Sinn Féin member, who was a key witness in the case against garda killer Aaron Brady, would not make a statement to gardaí before consulting with the party hierarchy, according to the lead investigator in the case.

Det Insp Pat Marry said he had to go to a Sinn Féin TD for help in the matter. The witness was then informed by the party there was no issue with him speaking to gardaí.

The witness’s statement, which detailed how he heard Brady confess to the murder, was the first major breakthrough for gardaí investigating Det Gda Adrian Donohoe’s murder in 2013.

His evidence was eventually disallowed at a pretrial hearing due to technical issues late last year. However Mr Marry, who retired two years ago, said he was still a vital witness as he disclosed that there were other people living in New York with information on Brady, leading detectives to concentrate their efforts there.

A Sinn Féin spokesman said on Monday party members “absolutely” did not require permission to speak to gardaí, here or abroad, and that the party had frequently called on people with information about the murder to come forward.

The break in the case came in February 2017 when the witness contacted Louth Sinn Féin Cllr Antóin Watters through Facebook and told him he had information. Mr Watters put him in touch with Mr Marry.

The witness wanted to help but told the detective that, as he was a Sinn Féin member, he was “not sure where he stood” about making an official statement without permission, said Mr Marry.

The detective said he went back to Mr Watters for help but the councillor told him it was a matter for the party’s head office. Mr Marry then approached a Sinn Féin TD, who he declined to name.

“They said to me: ‘Anything that Sinn Féin can do to help justice to be brought to the Donohoe family, we will do.’”

Mr Marry said Sinn Féin confirmed the witness was a party member. “The TD came back to me a couple of weeks later and said that man has been spoken to and told that absolutely, if he wishes to, he should to talk to the guards and make a statement.”

The witness then made a full statement. As a result of speaking to the witness, Mr Marry printed 150 posters appealing for information which were put up around New York. These led to further vital leads for the Garda and Brady’s eventual conviction last week.