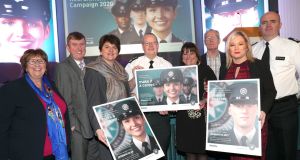 PSNI chief constable Simon Byrne has described a decision by Sinn Féin to attend the unveiling of a police recruitment drive in Belfast on Tuesday as “seismic and historic”.

Sinn Féin’s Deputy First Minister, Michelle O’Neill, and one of the party’s three Policing Board members, Gerry Kelly, turned up at the PSNI training centre in Garnerville in east Belfast shortly after the campaign launch to recruit 600 new studant officers was completed.

Chief constable Mr Byrne was delighted that Sinn Féin for the first time had attended such an event. “I think it is seismic and historic in terms of the history of the PSNI and the commitment we have heard from Sinn Fein today,” he said.

Asked if Sinn Fein’s attendance make a difference in helping to recruit more Catholics he said, “I really hope so. We have called for that support in the past. Now people have stood up to that challenge and have stepped forward and are encouraging people to join the PSNI. So I think it is an historic day not just for policing but for Northern Ireland,” he added.

While Sinn Féin has supported policing in Northern Ireland since 2006 this was the first time its senior members had attended such an event at Garnerville.

Ms O’Neill and Sinn Féin’s three Policing Board members – Mr Kelly, Linda Dillon and Philip McGuigan – had received invitations to the event well in advance but, according to PSNI sources, had not responded. There was speculation Sinn Féin might snub the event.

Any absence of Sinn Féin at the announcement was likely to trigger controversy, particularly in light of the general election and tonight’s RTE leaders’ debate which also will feature Sinn Féin leader Mary Lou McDonald alongside Leo Varadkar and Micheál Martin.

It emerged, however, during the event, which began at 10am on Tuesday, that Ms O’Neill and DUP First Minister Arlene Foster, who had been attending an Executive Brexit sub-committee meeting, would attend after that meeting and towards the end of the launch.

Ms Foster arrived around 11.10am, and Ms O’Neill and Mr Kelly arrived about 15 minutes later. The First Minister and Deputy First Minister then joined the chief constable Mr Byrne and other police and Policing Board members. They also posed with pictures of recruitment posts urging people in relation to policing to “make it a career”.

After that Ms O’Neill and Mr Kelly did a brief doorstep with reporters. Asked was it a “last-minute” decision to attend she said she had just come from a Brexit sub-committee meeting of the Northern Executive. “I want to be here,” she added.

Ms O’Neill said “it is no secret” that nationalists and Catholics were under-represented in the police service. Catholic representation is at 32 per cent. “If we are going to have a police service that commands community confidence then it needs to be reflective of the community that it serves,” she added. “So we are here because of that reason.”

Ms O’Neill also said they were at the training centre to meet the chief constable Mr Byrne and to reassert Sinn Féin’s support for 50: 50 Catholic: Protestant recruitment to the PSNI. She also wanted to make the point about under-representation of women and people from ethnic backgrounds.

Asked would she encourage Catholics to apply to join the PSNI Ms O’Neill did not give a definitive answer but instead said: “The fact that I am here today speaks volumes in terms of what I am trying to do. We need a PSNI reflective of the community it serves.”

The chief constable had not heard Ms O’Neill’s earlier comments to the press where she did not quite go so far as encouraging Catholics to join the PSNI, despite her positive inference about her presence at Garnerville.

Mr Byrne said: “We don’t underestimate the significant step forward that Sinn Féin have taken in endorsing this campaign, merely by being here and beginning a conversation about how we can work differently to improve policing right across the country.”

On 50:50 recruitment Mr Byrne said that was a political decision, and not one for him.

First Minister Ms Foster said Ms O’Neill’s attendance was “significant and I very much welcome it”.

“It sends out a good message,” she added. Ms Foster hoped it would encourage more Catholics to join the PSNI. “I hope they will now come forward and join the police service.”

The PSNI is looking to recruit 600 new student officers. Allowing for retirements and other turnover of staff, the recruitment drive will maintain the number of police at about 6,900. Police say numbers should be 7,500.

Mr Byrne said on Tuesday his priority is to build community confidence and invest in neighbourhood policing.

Currently just over 32 per cent of the PSNI comes from a Catholic background. Female representation is at 29 per cent.

“I want our service to be representative of the communities we serve. It’s important for sustaining public support and public confidence,” said Mr Byrne.

“Currently we have a number of under-represented groups within our service from which we would particularly welcome applications, including females, including Catholics, young people ethnic minorities, working class communities and members of LGBT+ communities,” he added.

In spite of Brexit the recruitment is open to applicants from the Republic. The closing date for applications is February 25th. Training takes 23 weeks, and students earn £20,000 (€23,535) per annum in training. When qualified the annual pay is £23,000, but police say that taking in special allowances and overtime would see most new officers earn up to £30,000 annually.