Shotgun, drugs and sum of cash seized by gardaí in Dublin 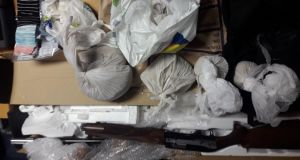 Gardaí in Dublin seized a shotgun, drugs and a sum of cash on Monday. Photograph: An Garda Síochána/Facebook

Drugs, a sum of cash and a semi-automatic shotgun have been seized in Dublin as part of a Garda operation targeting organised crime.

On Monday, gardaí observed the firearm being handed over between two vehicles in the Finglas area. The vehicles were stopped and the weapon was recovered.

A man (31) and woman (53) were arrested and are being detained at two different Dublin Garda stations. They can be held for 72 hours.

In follow-up searches, a “substantial” amount of cocaine worth about €140,000 was recovered, along with suspected heroin and a mixing agent with an estimated value of €900,000 (subject to analysis).

The seizure was the result of an intelligence-led operation targeting an organised crime group in Dublin south and west, according to gardaí.