Shot because his name was Hutch: The propaganda war 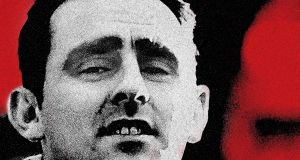 Derek Coakley Hutch: Like most of the Kinahans’ victims, he appears to have had no involvement in anything that could be even loosely defined as active organised crime

When the end came for inner city hard man Derek Hutch it was by his own hand. The 44-year-old had grown depressed. He had made a confession to the Garda in the week before his death claiming he had killed a Dublin criminal 18 years earlier.

On February 21st, 2009, he was released from St Vincent’s Hospital in Fairview, not far from his north inner city stomping ground; into the care of his wife Noeleen after a five-day hospital stay.

6 Mayo's Clare Island one of State’s most infected communities

9 Covid-19: International travel may not be possible by Christmas – Varadkar

12 Stabbed teenager with ‘beautiful soul’ had ‘bright career ahead’

15 Can five minutes’ exercise a day make you fit?

18 In profile: A 16-year-old gang leader with links to drug trade

19 We must ask obvious question over shooting of George Nkencho

21 Jon Bon Jovi: ‘That whole lifestyle was so vapid. I couldn’t wait to get away from it’

24 Emma Dabiri: George Nkencho’s death ‘brought me back to the Ireland I grew up in’

26 Covid-19: Any plan to ease restrictions comes laden with caveats

28 Dublin drops out of top 10 ‘most liveable’ cities

29 GameStop focus of war between Wall St and small investors

30 Tributes to Dublin doctor who died with Covid-19

31 What caused the mass extinction on Earth 359m years ago?

34 If the vaccines row wasn’t real, Boris Johnson would have to invent it

35 Will Brexit be anything more than a historical footnote?

38 One in five adults aged 60+ depressed during Covid-19, study finds

40 Hilltop living in Dublin 6 home with family appeal for €1.1m