Fears include vehicle interaction with cyclists in bike lanes, and speed and helmet criteria 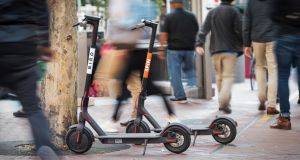 The overriding Garda view is that a clear decision must be taken to either allow e-scooters under regulation or ban them completely. Photograph: David Paul Morris/Bloomberg

Concern is growing in Garda circles about the increased use of e-scooters, especially in Dublin, as a public consultation on the future of the devices gets under way.

At present, the devices are classed as mechanically propelled vehicles and their use is illegal on public roads or in public places. However, they have been growing in popularity and, while some users have been stopped and had their scooters seized, they are being used very regularly.

Senior Garda sources who have spoken to The Irish Times have said the mix of e-scooter users and cyclists in cycle lanes is an issue of concern if the scooters are legalised.

“If they are allowed in cycle lanes there are concerns they won’t mix well with cyclists from a safety point of view,” said one source.

“But if they aren’t permitted in cycle lanes, are they going to be out in a lane with cars and other vehicles?”

Another added: “Their design doesn’t make them a good fit to mix with either cyclists or vehicles. People using them are very vulnerable in a crash with a vehicle, more so than cyclists.”

Other Garda sources said any legislation or regulation introduced to provide for e-scooters would quickly become obsolete.

“The expectation is that the technology in them will get better and these scooters will become a lot more powerful,” said one Garda source. “And then are you into a period when these become more like small motorbikes, certainly in speed terms.”

However, the sources said the overriding view in the Garda was that a clear decision must now be taken to either allow e-scooters under regulation or to ban them completely. “At the very least the same type of regulations that apply to cycling need to be applied,” said one source.

At present, the sources said, members of the Garda faced a situation where the e-scooters were defined by law as an mechanically propelled vehicle (MPV). However, users were not complying with the laws governing MPVs, yet the use of e-scooters was growing in popularity.

The two-month public consultation process that has just been commenced by the Department of Transport may result in e-scooters being approved for use on Irish roads or being prohibited.

A report commissioned by the Road Safety Authority has broadly supported legalising the use of e-scooters in the Republic, under some conditions.

The report commissioned by the RSA said a first step towards developing policy and legislation would be to agree “clear terms of vehicle classification”. It also suggested that the use by e-scooter users of helmets should be promoted, though it stopped short of suggesting making helmets compulsory.

The report added “guidelines” should also minimise the likelihood of high-speed collisions by banning use of devices on high-speed roads. A maximum speed limit of 6km/h has also been suggested for e-scooters used on pavements.