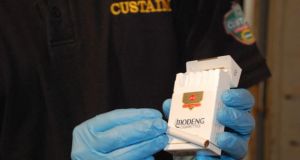 Legislation is proving particularly effective against cigarette gangs, with cash linked to that trade this year accounting for half of the forfeiture orders.

The number of seizures of cash linked to organised crime has reached record levels and large seizures are increasingly being linked to the black market cigarette trade. Revenue’s customs officers in June seized the largest amount of cash ever found in the State, with some €300,000 worth of euro, sterling, Canadian and US dollars found in one operation.

Figures obtained by The Irish Times reveal in the first eight months of the year there were 43 seizures of cash in the State, almost as many as the record 48 seizures for the full year in 2012. Five years ago, there were just 15 seizures.

Revenue sources said some of the money was being taken out of the State to buy 40ft containers of cigarettes to be smuggled in.

Some cost 50 cent a pack and were resold on the black market at €4.50 or half the recommended retail price.

Under changes to the Proceeds of Crime Act, Revenue can seize cash it suspects is linked to any form of crime, and not just the drug trade, as was the case before.

The legislation is proving particularly effective against cigarette gangs, with cash linked to that trade this year accounting for half of the forfeiture orders. These orders are needed to permanently retain seized money.

“When we move against the cigarette gangs we are more likely to find larger sums of money than when we seize drugs, but a few years ago it would have been the other way around,” said one Revenue source.