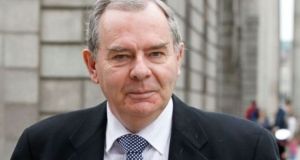 Businessman Seán Quinn complained to the Diocese of Kilmore about Co Cavan priest Fr Oliver O’Reilly over his homily condemning “the paymaster or paymasters” behind the attack on businessman Kevin Lunney.

Monsignor Liam Kelly confirmed that Mr Quinn wrote to him and that he met the former billionaire last month over Fr O’Reilly’s homily at Our Lady of Lourdes Church in Ballyconnell at the end of September.

The parish priest blamed “a Mafia-style group with its own godfather” for the September 17th abduction and torture of Mr Lunney by a gang who threatened to kill him if he did not resign from Quinn Industrial Holdings (QIH), the building materials company lost by Mr Quinn and his family in the financial crash.

“I received a letter from Seán Quinn and I met with him,” Monsignor Kelly told The Irish Times, declining to comment further at this stage because these were “sensitive issues”.

Mr Quinn has repeatedly criticised the remarks made Fr O’Reilly, who did not name anyone in his public condemnation of the attack. Mr Quinn has said that he had “no hand, act or part” in the attack on Mr Lunney.

He confronted Fr O’Reilly about the homily when he called to his home unannounced to his home. He also complained about the priest’s remarks to a Garda superintendent.

Mr Quinn would not comment specifically on why he contacted the diocese. He told The Sunday Independent: “I’m not going there but sure any fool would know why I wrote the letter.”

He accused the priest of “telling lies” from the altar and told the newspaper that Fr O’Reilly was “off his head.”

The Irish Times sought a comment from Mr Quinn on Sunday without success. Fr O’Reilly has declined to comment further on the matter.

The Co Cavan priest is installing additional security measures after speaking out against the perpetrators of the attack on Mr Lunney. A local source said the phone line to his parish home had gone down twice in the last month and that the priest was not sure if this was in some way connected with him speaking out.

Two Garda detectives called to Fr O’Reilly’s home after he delivered his homily over the last weekend of September but he did not name anyone to the officers and said he had “no hard evidence” about the attack.

Death threat letters sent to five local directors of QIH last week claimed Mr Quinn was “stabbed in the back” and they were to keep the company “in safe hands” until he could buy it back. This has been rejected by the directors of QIH, which they now run on behalf of three US investment funds.

Mr Quinn has condemned the attacks and last week called on those making the threats to “withdraw them immediately” saying that they were “badly mistaken” if they felt they were acting in his or his family’s name.