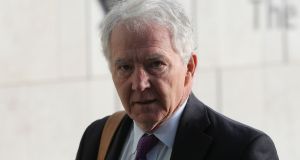 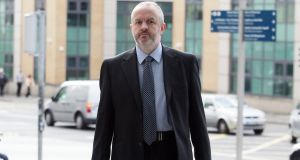 Kevin O’Connell, a solicitor with the Office of the Director of Corporate Enforcement: said that at the time he was under “enormous pressure” and made a “dreadful mistake”. Photograph: Collins/Courts

An investigator into alleged crimes by the former Anglo Irish Bank chairman Seán FitzPatrick shredded documents relevant to the inquiry, the Circuit Criminal Court has heard. Solicitor with the Office of the Director of Corporate Enforcement (ODCE) Kevin O’Connell said he “made a calamitous error and shredded a small number of documents” in 2015. He was speaking after he had been cross-examined by Mr FitzPatrick’s counsel, Bernard Condon SC.

Mr O’Connell said that at the time he was under “enormous pressure” and made a “dreadful mistake”.

The 2015 trial failed to reach a conclusion and a new trial was started in September last year and is continuing. It has heard that since the first trial ended, the ODCE has instructed that only gardaí seconded to the office should interview witnesses in criminal inquiries.

The ODCE solicitor, who played a leading role in the inquiry, said the documents he shredded were only a “tiny” proportion of the documents that were available. Mr Condon said something had to explain the “extraordinary sequence of mistakes” made by the ODCE during the inquiry . He said one explanation was that the it was “driven by a desire to produce a head, to deliver the goods”. Mr O’Connell said that was not the case.

The office had been diligent in retaining all documents linked to the case and had shared them with the Director of Public Prosecutions. “You got carried away with yourself because you had the opportunity to get Seán FitzPatrick,” Mr Condon said. Mr O’Connell rejected the suggestion.

Mr Condon said the then director of corporate enforcement, Paul Appleby, also appeared to have had “a very significant desire to get” Mr FitzPatrick. Mr O’Connell said he did not believe Mr Appleby was improperly motivated.

Mr FitzPatrick (68), Whitshed Road, Greystones, Co Wicklow, has pleaded not guilty to 27 offences under the 1990 Companies Act. These include 22 charges of making a misleading, false or deceptive statement to auditors and five charges of furnishing false information in 2002-2007.

The prosecution alleges the loans were “artificially reduced” for a period of two weeks around the bank’s financial year ends by loans from Irish Nationwide Building Society.

The trial heard Mr FitzPatrick was in danger of being jailed because of a “clanger” made by the bank’s former auditors. The bank’s auditors, EY (formerly Ernst & Young), asked Anglo directors to sign the wrong type of letters of representation during the years relevant to trial, the jury was told.

Mr O’Connell said the ODCE took the view there was a requirement on Mr FitzPatrick to give a truthful answer to questions put to him by the bank’s auditors. “It looks like EY made a mistake and used the wrong document,” Mr Condon said, referring to the letters of representation. Mr O’Connell, he said, had referred to this as “fortuitous”. Mr O’Connell and the ODCE was “trying to put a man at risk of imprisonment” because of this “clanger” by the auditors, Mr Condon said.

Mr O’Connell said his office took the view that even it was a mistake, it still required a truthful answer.

The trial heard that during a phone conversation with Liam Kennedy of A&L Goodbody, Mr O’Connell was told that EY was co-operating with the inquiry out of a sense of “corporate social responsibility”.